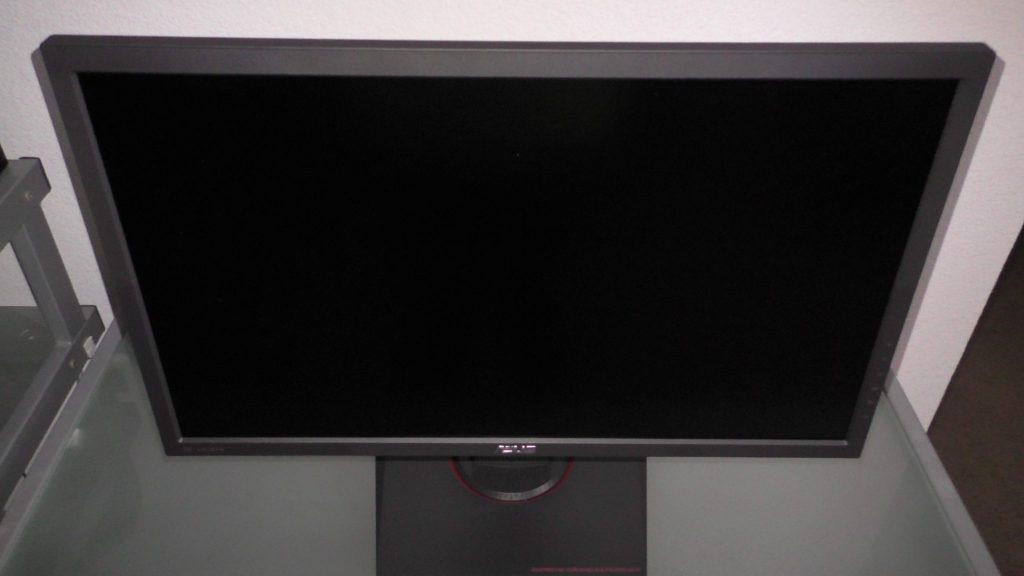 Technology evolves quick. Not long ago, owning a high-quality 4K monitor at an affordable price was a tall order. The extreme push towards 4K resolution from hardware and software manufacturers has dramatically reduced the cost of owning a 4K display, making it an easy choice when shopping for a new screen. ASUS has a new lineup of 4K monitors that it unveiled at CES 2016 earlier this year, with an emphasis on 4K gaming. The MG24QU is the youngest member of the MG family, featuring a 24-inch 4K IPS display with a 60hz refresh rate, bundled together with Adaptive-Sync support. IPS technology has gotten more popular over the recent years, due to advancements in response time, while providing a higher-quality picture over traditional TN displays. While TN technology still reigns supreme in terms of response time, it’s also important to enjoy the visual fidelity that modern games offer (especially if your computer can handle 4K resolution).

Aesthetically, the MG24QU is a very appealing monitor. It’s nice to see ASUS pursue a color scheme that is different from your usual black chassis; the entirety of the MG24QU is molded with gray plastics and red accents. The MG24QU takes design cues from ASUS’ earlier PG278Q monitor (which we reviewed some time ago) that I personally found to be quite attractive. 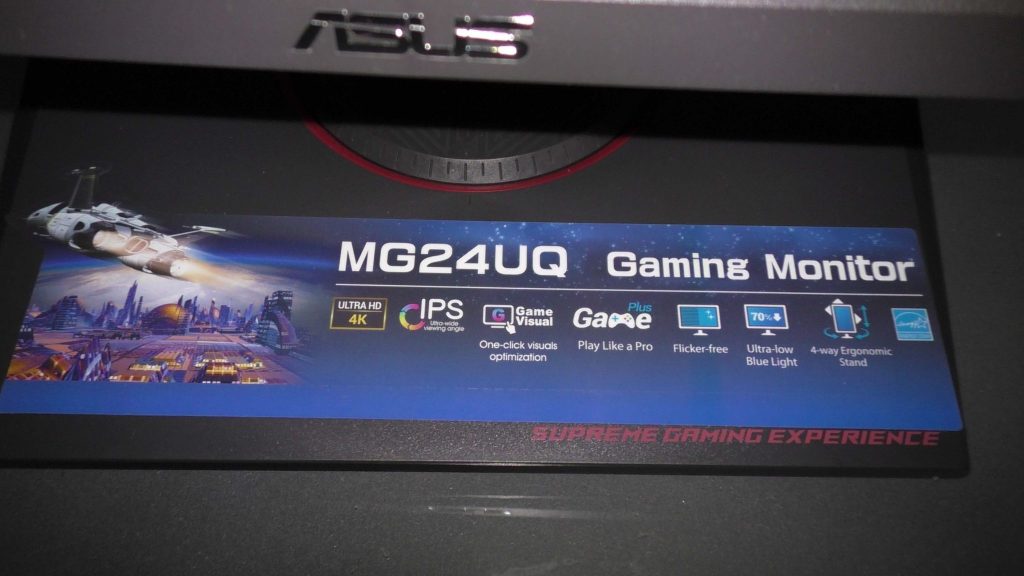 Upon pulling the monitor out of the box, you will notice a sticker placed onto the base with some of the monitor’s features. As mentioned earlier, the monitor has a 4K resolution and IPS panel, but also features a flicker-free display, as well as ultra-low blue light for increased viewing comfort. Most modern monitors come equipped with these features, so it’s nice to see ASUS utilizing them on the MG24UQ. The base itself has a larger footprint then most monitors in this size range, however it’s not big enough to be considered obtrusive. The monitor can be freely rotated to accommodate a wide range of viewing angles, without any noticeable wobble in the process. In addition to the base’s rotative ability, the monitor can be placed into vertical orientation, which is now a commonplace feature for premium monitors. This becomes especially handy when viewing long web pages or portrait-based content. 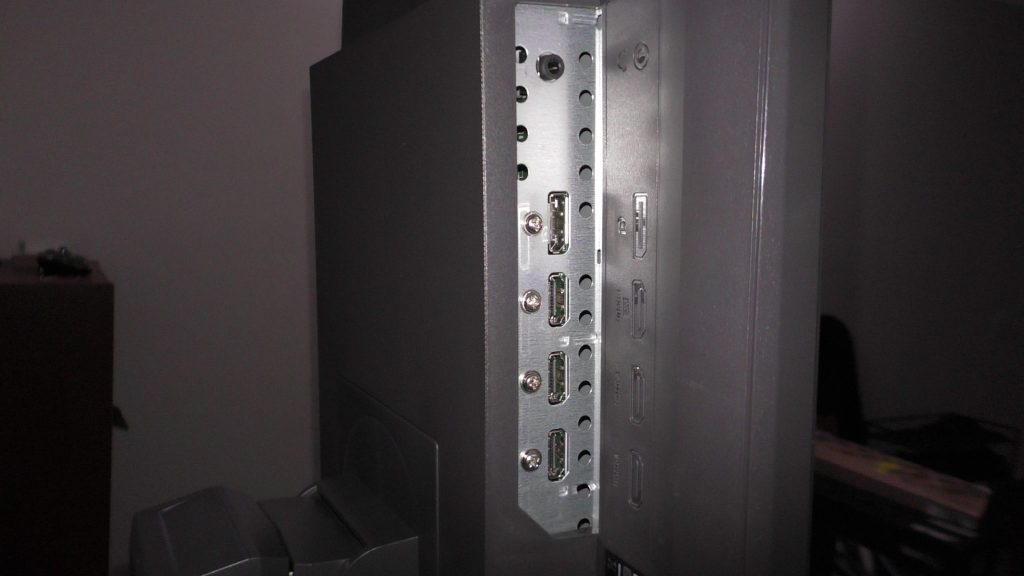 First generation 4K monitors had several limitations that made them difficult to recommend.  One of these limitations was 4K output at 30hz due to outdated HDMI-spec (3840 x 2160 @ 60hz requires DisplayPort or HDMI 2.0 connectivity). Thankfully, the MG24UQ doesn’t have this limitation, as the monitor offers several connectivity options. Three HDMI inputs and a single DisplayPort 1.2 input can be found here; two of the HDMI inputs are 1.4, and one of them is 2.0. In order to achieve 4K resolution at 60hz, you will have to utilize the HDMI 2.0 or DisplayPort 1.2 port. Connecting a source to the HDMI 1.4 ports will result in a maximum resolution of 3840 x 2160 @ 30hz. Additionally, a headphone jack is present to route HDMI/DisplayPort audio to an external set of speakers or headphones. The monitor also includes built-in speakers, which should come in handy for those that need a quick sound fix. Just don’t expect great sound from them.

The buttons on the MG24UQ are similar in design to the PG278Q, and are complimented by a joystick that makes menu operation on the MG24UQ incredibly easy. Frankly, these buttons would be a nightmare to handle without the joystick, and would require you to train your muscle memory to remember which functions are tied to the appropriate button. Thankfully, this isn’t the case. The joystick is a button itself, and pressing down on it brings up the main OSD. From here, you can easily navigate across menus to configure the monitor to your liking. There is some mental training involved to remember what each button does, however you can easily back out of an incorrect menu by pressing the button directly beneath the joystick. Overall, the joystick makes menu operation a breeze, even in dark rooms. The MG24UQ features almost every customization option you would need to tweak. You can select from various preset picture modes, such as Scenery, Racing, Cinema, and sRGB. The Blue Light Filter tones down the appearance of blue in an attempt to preserve your eyesight. Higher blue light filter levels reduce the appearance of blue in your overall image. Under the Color menu, you gain the ability to tweak brightness, contrast, saturation, color temperature, and skin Tone. The Image menu allows customization of sharpness, Trace Free (response time), aspect ratios, and dynamic contrast ratio via ASCR. Finally, the monitor has some extra functionality in the form of GamePlus and ECO modes. For a full list of functions available in the OSD, check out the screenshot gallery below. 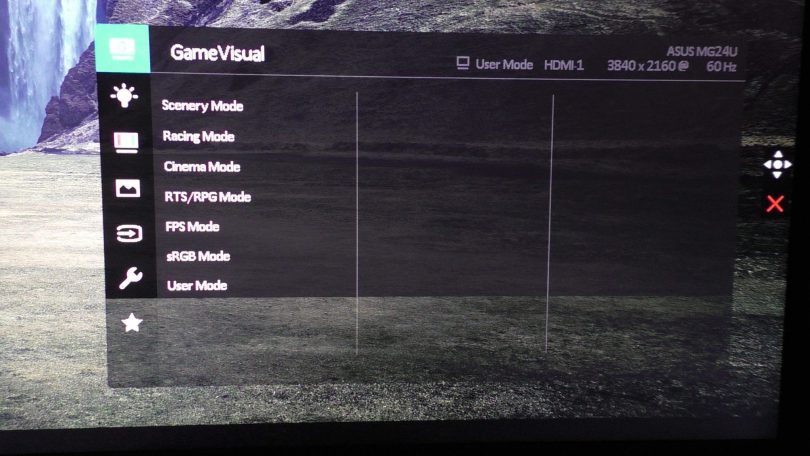 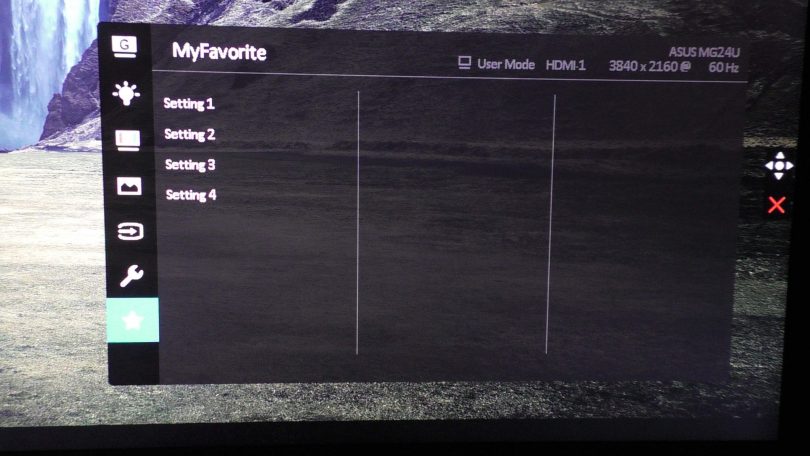 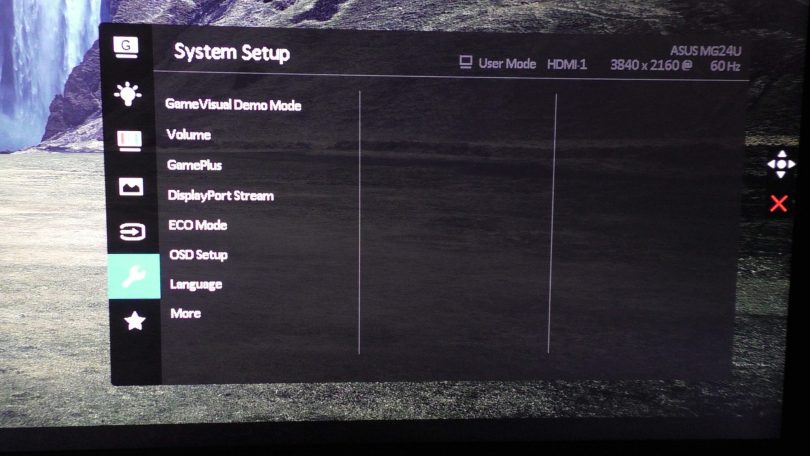 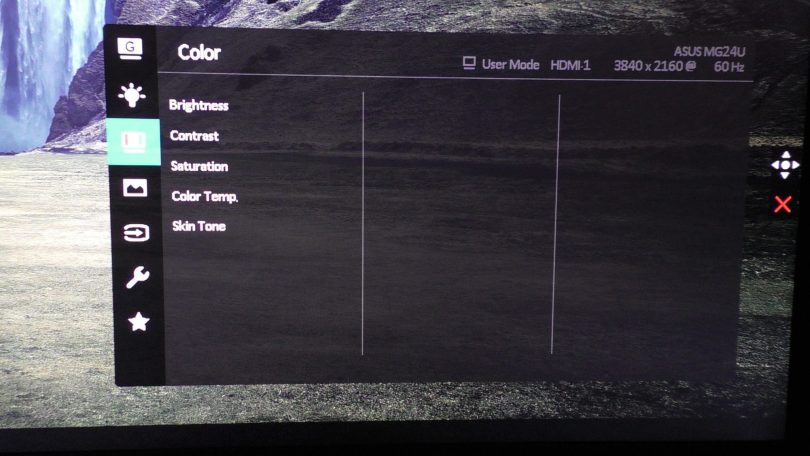 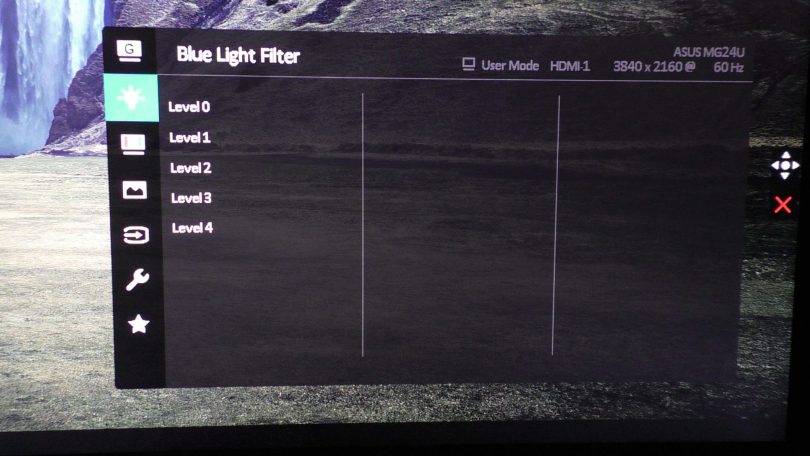 Panel uniformity is something that’s hard to gauge, as it can vary among different panels in the same model class. After calibrating the MG24UQ sample I received to approximately 6500 K at 120 cd/m², I performed a uniformity test to check for potentially uneven backlighting. Fortunately, the MG24UQ sample I received performed admirably in the uniformity test, with the highest deviation appearing on the top parts of the screen. The largest recorded deviation from the center was approximately 6%, which translates to approximately 111 cd/m².

Most monitors don’t quite hit optimal settings out of the box, and the ASUS MG24UQ is no exception in this regard. It is, however, quite easy to achieve acceptable settings via OSD controls only. We personally calibrate monitors to sRGB standard, which consists of 6500 K color temperature and 2.2 gamma curve, with a slight bump in luminance to 120 cd/m² (80 cd/m² is a bit too dim for anything outside of a completely dark room). Default brightness out of the box was scorching, and had to be reduced significantly to meet our 120 cd/m² target. IPS panels are known to have great color accuracy and viewing angles, however they tend to have slightly higher black levels when compared to VA panels. This held true in our black level test after calibration, measuring 0.12 cd/m² at 120 cd/m² luminance. I personally found the black level to look good in subjective viewing, and was able to discern all of the squares in Lagom’s black level test. Native contrast ratio measured approximately 1005:1, which is in line with ASUS’ listed contrast ratio of 1000:1.

Below are the measurements for the MG24UQ using calibrated OSD settings and Windows’ default sRGB profile. The data below shows the deviance when compared to our custom ICC profile: 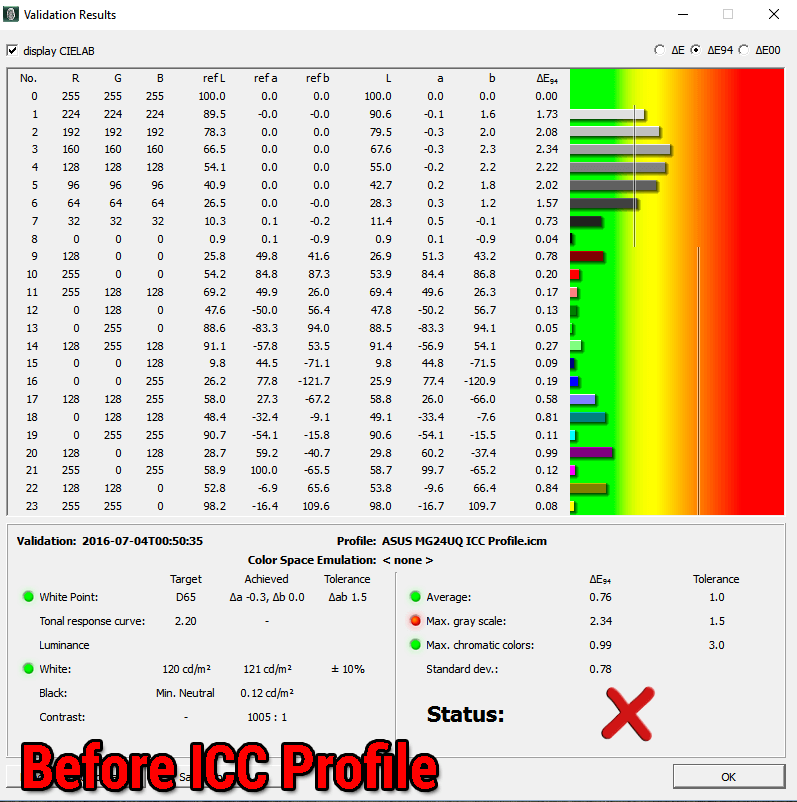 Once we combine our OSD tweaks with our custom ICC profile, we manage to get these results: Note: These settings were achieved using an i1 Display Pro, along with X-Rite i1 Profiler and BasICColor software. The GPU used on this monitor was the AMD Radeon R7 260X, using stock settings. These settings require an additional ICC profile for accuracy. Use these settings at your own discretion, as they may look different on your display.

ASUS has a proven track record when it comes to low input latency. Some of the highest performing monitors in our input lag database are ASUS monitors, so I was quite excited to see if this monitor lives up to their pedigree. The MG24UQ doesn’t disappoint. IPS monitors have steadily reduced their input lag as they have grown more popular, and it’s great to see that a 4K IPS monitor is capable of producing these numbers:

Taking the average of the measurements results in an input lag of 10ms (rounded-up). This is an outstanding result, putting the MG24UQ in line with the fastest gaming monitors on the market today. What’s even more remarkable is that this test was performed at 1080p resolution, which was being upscaled to 4K via the monitor’s scaler.

Panel input lag only tells one half of the story, however. The MG24UQ is equipped with Adaptive-Sync/FreeSync support, which allows the monitor to directly communicate with a supported AMD GPU. Once paired accordingly, Adaptive-Sync compliments V-Sync by removing its drawbacks, namely stuttering and input latency. This also allows for more refined control of FPS fluctuations, which smoothens out big performance swings that occur during areas of heavy processing. It’s quite useful for 4K gaming, as most graphics cards currently have trouble running 4K at 60 FPS on a single GPU. If you experience performance dips due to the running games at 4K, Adaptive-Sync can help reduce the excessive frame fluctuations you would typically experience with V-Sync alone. The reported FreeSync range in AMD’s control panel for the MG24UQ is 40-60hz.

How does FreeSync perform on the MG24UQ? Quite admirably. We booted up Crysis 3 and picked an area of the game that is prone to stutters with simply V-Sync enabled, however this stutter is mostly removed when Adaptive-Sync/FreeSync is also enabled. One downside to FreeSync is that V-Sync has to be enabled with it, otherwise you will still experience screen tearing if your FPS goes too low or too high (as of Radeon Software Version 16.6.2). Most FreeSync monitors have a pre-determined FPS range where the benefits of FreeSync are disabled if you linger in this range. To give an idea of how FreeSync works, I picked an area of Crysis 3 that caused stutters on camera rotations, and used the area to showcase the difference. Without FreeSync, micro-stutters are present when panning the camera, however with FreeSync enabled, the stutters are gone, leaving you with a smooth camera pan. You can watch this demonstration here:

With a 4ms GTG (gray-to-gray) response time, the MG24UQ has one of the fastest response times available in an IPS monitor. While this doesn’t match the ultra-low 1ms provided by TN monitors, IPS panels offer far superior picture quality in return. It’s hard to detect the difference in response time for most gamers. To control the amount of overdrive used by the MG24UQ, ASUS includes a “Trace Free” setting, which allows you to change the intensity in increments of 20. By default, the monitor comes with a Trace Free setting at 60, which keeps the picture smooth but results in some trailing artifacts on fast moving objects. Dialing this setting down to 20 creates the best balance of image quality and response time. Check out the screenshots below to see the difference among all Trace Free settings: 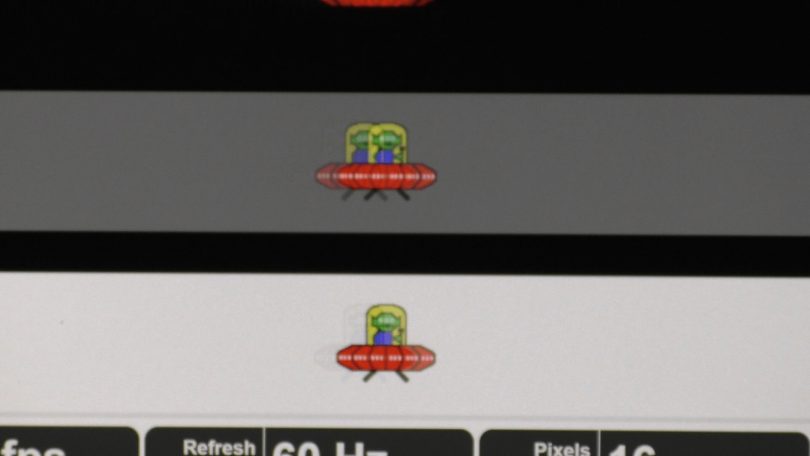 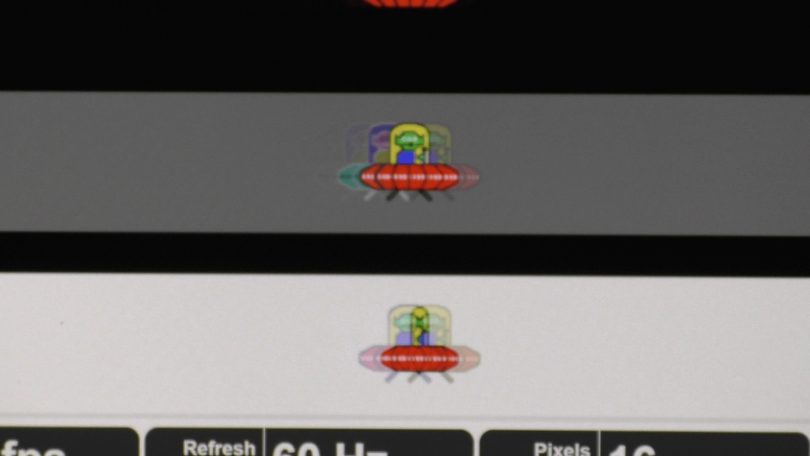