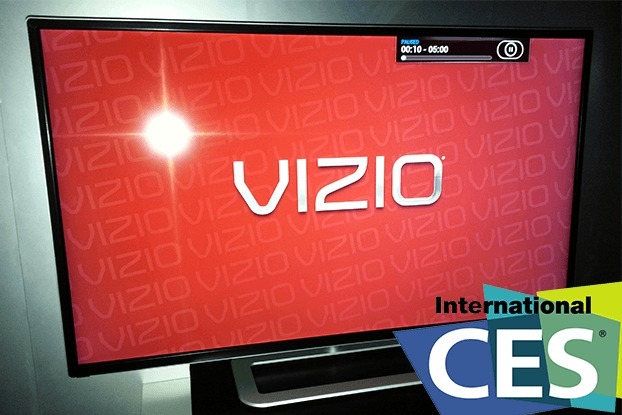 I’ll be the first to admit, Vizio has come a long way since they first debuted onto the HDTV market. Upon starting my journey last year forming our input lag database, I started to notice that quite a few Vizio HDTVs were rather good for gaming. As a matter of fact, several of them scored under 30ms of input lag, which is more than adequate for the majority of gamers out there today. This revelation made Vizio one of my most exciting stops at CES 2014, and I was really interested in seeing what they had to showcase for the new year. Vizio wasn’t part of the convention center, and was instead found secluded at the Wynn hotel on the Las Vegas strip. Read on to see their exciting lineup of new HDTVs. 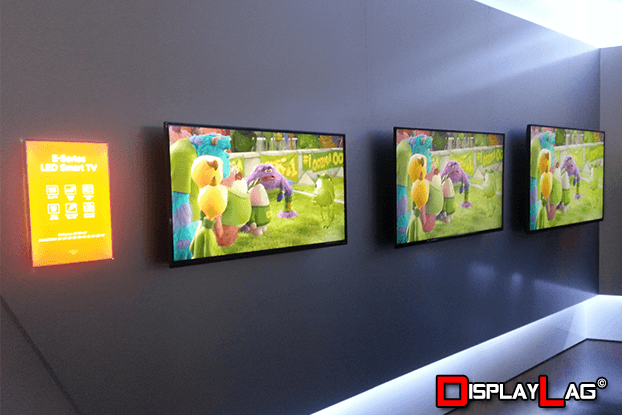 Vizio’s E-Series is known as their entry-level line of HDTVs, and to be honest, I wasn’t expecting much when I was given a tour of what this series had to offer this year. That sentiment shifted rather quickly once I found out that even the basic E-Series would be given full array LED backlighting, complete with local dimming over 16 active LED zones! For those that are unaware, having local dimming functionality improves picture quality of standard Edge-Lit LED screens, selectively dimming dark areas to improve perceived contrast ratio. A common area to notice the difference are the horizontal black bars during a movie, an area that is constantly illuminated on conventional Edge-Lit LED HDTVs. While local dimming was offered last year in Vizio’s HDTVs, I’m glad to see that picture uniformity continues to hold importance in Vizio’s E-Series, as it will hopefully set a precedent for other manufacturers to follow at this price point. The E-Series will feature a “Clear Action Rate” of 180, though it’s natively running at 60hz refresh rate. In terms of screen sizes, Vizio’s E-Series will be starting at 23-inches, and top out at a large 70-inches of screen real estate, running at 1080p resolution. While the lower price points of the smaller sizes are certainly appealing, you shouldn’t go lower than 39-inches if you want to experience the local dimming goodness. You can expect the full spectrum of smart TV functionality, including Netflix and YouTube, as well as built-in Wi-Fi for those that despise hooking up an ethernet cable to their HDTV. In terms of aesthetics, the E-Series will be 33% slimmer than last year’s line, featuring a 10mm bezel. The Vizio E-Series will be starting as low as $159.99 for the 23-inch, with prices capping at $1599.99 for the 70-inch model. 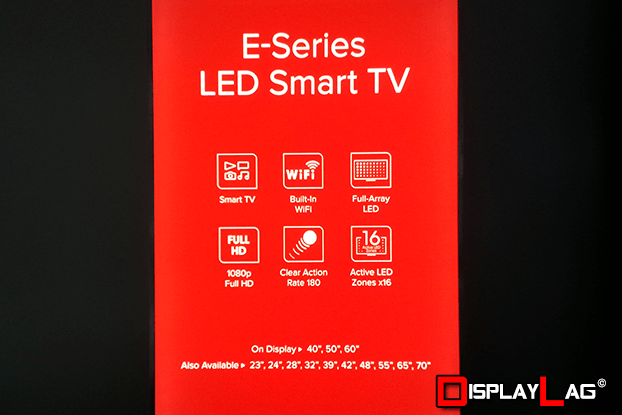 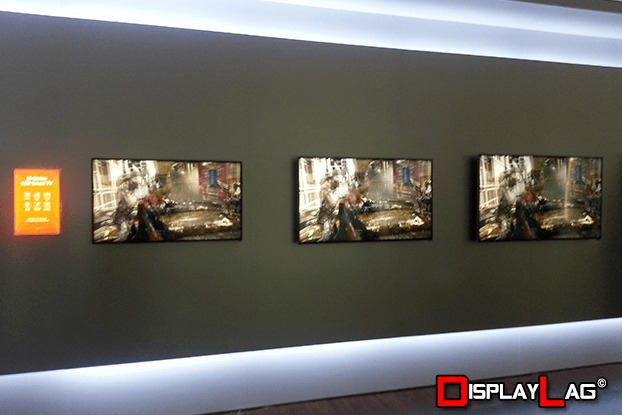 Vizio’s M-Series features 32 Active LED Zones (over the 16 present in the E-series), as well as Active Pixel Tuning.

So, what kind of improvements can you expect if you move up to Vizio’s M-Series? For one, you will be receiving double the active LED zones over the E-Series (up to 32), which will be a significant improvement if you want to improve your contrast ratio. One improvement as a result of increased active LED zones is 2D local dimming, spanning both horizontal and vertical ranges. The M-Series will also feature Active Pixel Tuning, allowing the brightness of pixels to be dynamically adjusted depending on the content present on screen. Upon viewing the M-Series on the floor, I was very impressed with the picture quality of the set, as it offered excellent colors and contrast, along with some great picture uniformity. All M-Series panels will fully support 1080p, and feature a “Clear Action Rate” of 720. This is up from 180 offered by the E-Series. While this generally boils down to marketing terminology, you can expect the M-Series to feature 120hz panels, which should result in very minimal blur, if any. The M-Series will debut at 32-inches, and go all the way up to 80-inches in screen size, along with a 8mm bezel. The 32-inch version will start at $329.99, while the largest 80-inch will be retailing for a massive $3,299.99. 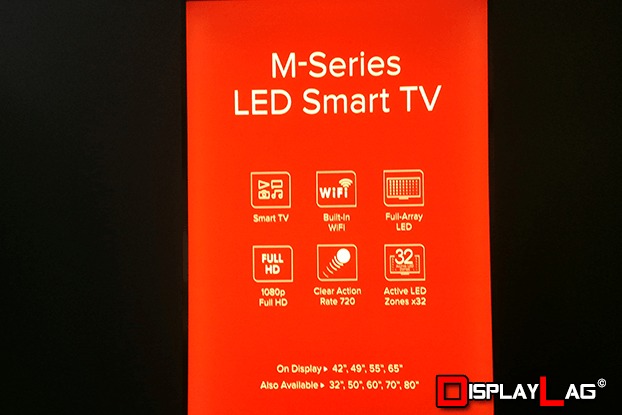 The Vizio M-Series has some notable improvements over the E-Series, including 32 active LED zones for local dimming. 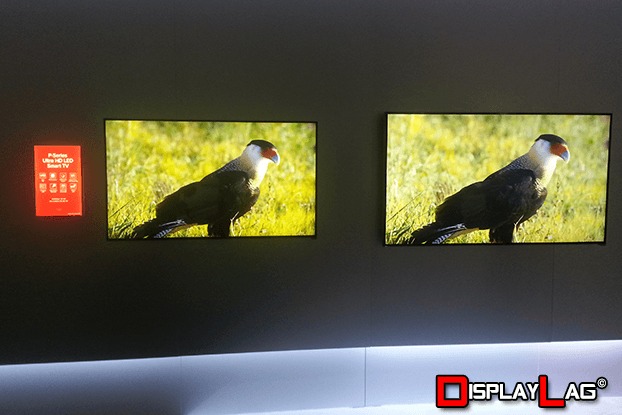 It wouldn’t be CES 2014 without 4K, right? The latest advancement in resolution is fully supported by Vizio’s P-Series, which will offer definite improvements over the M-Series. Aside from the native 4K resolution, the P-Series will feature 64 active LED zones for full array local dimming, which is a significant increase in zones over the M-Series. As 1080p content is still mainstream, Vizio has worked on developing what they call the Spatial Scaling Engine (SSE), which aims to upscale 1080p content without the typical artifacts that surround conventional upscaling processes. The P-Series also supports 24/48hz playback without the use of traditional 3:2 pulldown, being able to display both 24hz and 48hz content natively. Being a 4K HDTV, you can also expect the P-Series to come equipped the latest HDMI 2.0 and HDCP 2.2 standards.

Also featured is an HEVC codec that allows you to stream Ultra HD content from services such as Netflix. The presence of a dual-core CPU and quad-core GPU should help keep everything running fast and smooth (and hopefully keep input lag numbers down). In terms of panel refresh rate, the P-Series is fitted with a Clear Action Rate clocking in at 960, though the native refresh rate of the panel should be at least 120hz. The one thing that truly excites me, however, is that the P-Series will be able to natively display 120 frames per second via HDMI! For all of you PC gamers that have yearned for higher frame rates to display on your big screen HDTVs, it is now a reality starting with Vizio’s P-Series. The Vizio P-Series will be offered in screen sizes ranging from 50-70 inches, with the 50-inch version starting as low as $999.99, and the 70-inch version going for an impressive $2599.99! It’s great to see 4K in large screen sizes being offered for under $3,000, which I personally feel is the sweet spot for HDTVs in this size range. 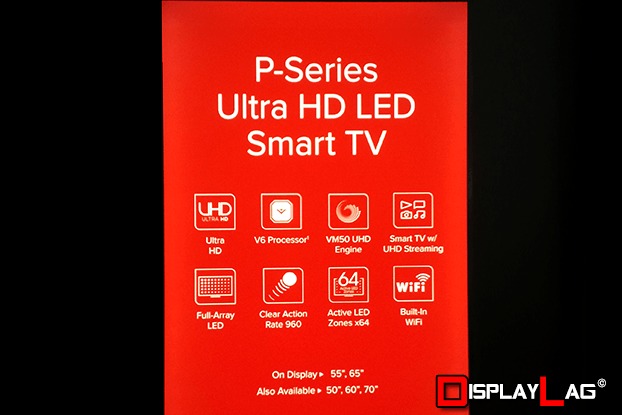 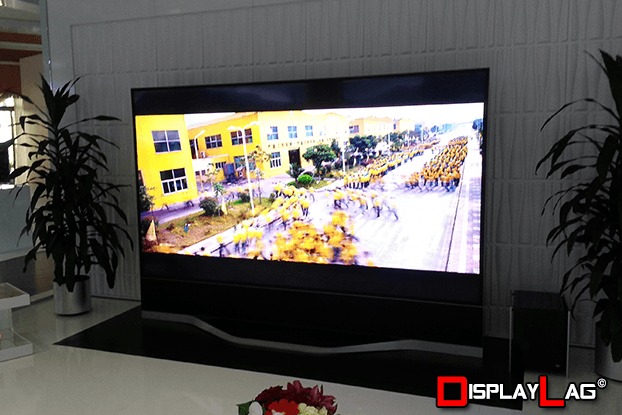 The cream of the crop, Vizio’s Reference Series features the best displays they have ever produced. Going into the demonstration area for the 120-inch RS120, I was floored with how detailed and amazing the content looked on screen. It’s no surprise, considering the specifications this line offers. Going one step further over the P-Series, the Reference Series offers a true 10-bit 4K panel, enabling the use of HDR (high dynamic range) content. This allows the color spectrum to exceed the established Rec. 709 standard, with the help of technologies like Dolby Vision. Vizio demonstrated HDR content on their Reference Series displays, and the improvement over Rec. 709 was impressive and intriguing. It’s hard to imagine still viewing Rec. 709 once content reaches this new standard. The active LED zones for local dimming sees a massive jump all the way to 384, which was evident when viewing the RS120, greatly enhancing the contrast ratio. The Reference Series features a 1800 Clear Action Rate, above the 960 that is offered from the P-Series. You can also expect the dual-core processor and quad-core GPU to carry over, as well as the VM50 Ultra HD processing engine. While the Reference Series isn’t targeted towards the average consumer, I’m glad to see that 120 frames per second is still accepted via HDMI, so for gamers that want the best in picture quality, you won’t be left out if you have the budget for a high-end display like this.

For anyone curious, the answer is yes. The Vizio RS120 is HUGE.

One of the key things that Vizio is introducing with this year’s HDTV lineup, specifically in their P-Series and Reference Series displays, is what they call High Velocity mode. This mode allows their HDTVs to accept native 120hz input from a capable source via HDMI. This is a huge leap for PC gamers that have been stuck gaming on 120hz monitors over the years, as it was the only way to display true 120hz. With Vizio introducing this new feature, it finally allows gamers to really experience what 120hz has to offer, by displaying 120 frames per second natively. While 120hz HDTVs have been on the market for years, they weren’t able to accept a true 120hz signal, and instead used the 120hz panel for motion interpolation — commonly used for creating fake frames out of existing 24/30/60hz content. 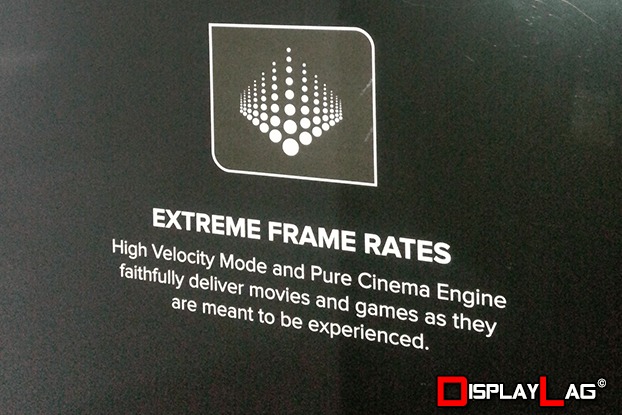 Unfortunately, Playstation 4 and Xbox One users will not be able to see the benefits of true 120hz, but it’s very exciting to see the first HDTVs starting to allow 120hz input without resorting to unofficial workarounds. Being able to display 120hz through HDMI also has an excellent side effect: the reduction of input lag! If you’ve played a game running at 30 FPS before, you may have realized that the controls feel sloppier than a game running at 60 FPS. It’s why games like Call of Duty continue to sacrifice graphical prowess for buttery-smooth gameplay. Running a game at 120 FPS should result in 50% less input lag over a game running at 60hz, so you can imagine the difference! The best part? You don’t need HDMI 2.0 to make this work, as Vizio is fully supporting High Velocity mode even through HDMI 1.4! Now if only this mode was present in the M-Series as well… one can dream.

Another great feature that will be present in Vizio’s 2014 lineup is the addition of scanning backlight functionality. Called Motion Blur Reduction, enabling this feature via the OSD will reduce motion blur that is normally present in LCD displays. Scanning the backlight usually comes with a caveat however, in that the overall peak brightness is drastically reduced when enabled. Vizio is aware of this issue, and manages to remedy it by driving the LEDs safely to a higher intensity. You should be able to expect similar brightness levels as if the feature were disabled entirely. 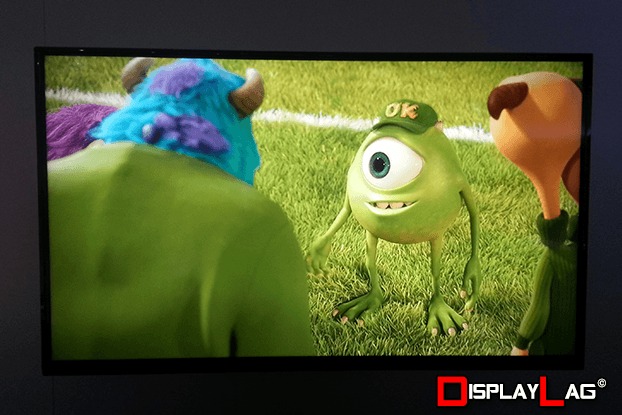 Motion Blur Reduction will reduce motion blur that is commonly present in LCD displays, by utilizing a scanning backlight. The benefits can be seen across all forms of content, including animated movies.

Most LCD displays on the market are sample-and-hold displays, which continuously illuminate and cause motion blur even with faster response times. By switching to strobing/scanning, you can drastically reduce the amount of motion blur that is normally present in LCD displays. The benefits can be seen across all forms of content, including sports, fast action scenes in movies, and video games operating at high frame rates. It’s great to see manufacturers offering solutions to problems that have plagued conventional LCD displays for years, as it will make the viewing experience better for everyone. With the promise of 120hz input via HDMI and scanning backlight functionality, I’m personally very excited to get my hands on Vizio’s HDTV lineup this year for a test drive, as should any gamer.

This wraps up my coverage of CES 2014! Don’t forget to check out our input lag database, with nearly 300 displays tested for input lag. To check the rest of my CES 2014 coverage, you can use the links below to navigate accordingly. Please leave your comments below and let me know your thoughts!