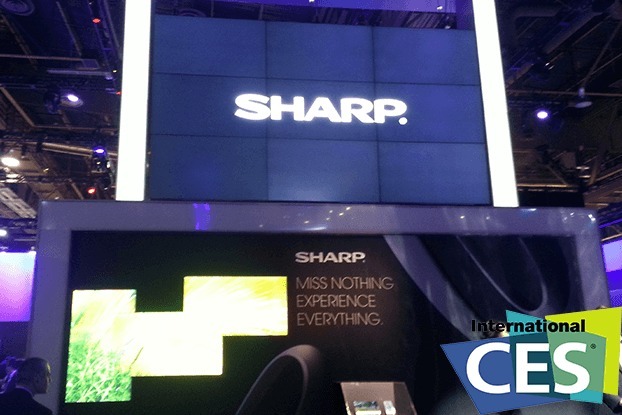 Sharp is a brand that has earned recognition catering to consumers that value larger displays. I still remember the time when I walked into a store and saw Sharp’s first 70-inch HDTV, being amazed at how large it was. At the time, most manufacturers did not cater to this demographic. Fast-forward to today, and you can now find several 70 and 80-inch HDTVs from several top manufacturers (although Sharp still holds its own in the 90-inch category). Their exhibit area at CES 2014 featured some of their latest advancements scheduled for this year, so lets see what they had in store. 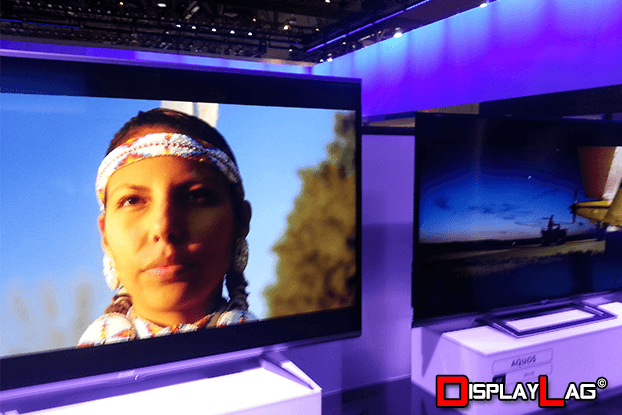 Sharp’s Quattron+ technology is an interesting advancement with their current 1080p HDTVs. With 4K content still under development, 1080p is still the holy grail for many consumers today, especially with the release of the next generation Playstation 4 and Xbox One consoles. While Sharp did debut their 4K initiative at CES 2014, they seemed far more excited about showing off Quattron+. The technology divides a single pixel into two, resulting in 10 million more pixels over standard 1080p through a process Sharp calls “Revelation”. That is certainly an impressive number for those that crave more pixels, but don’t want to make the jump to a full 4K HDTV just yet.

The Q+ display was presented next to their 4K HDTV for demonstration purposes, and while it was impressive, you could notice the difference if you really looked for it. The difference was much less pronounced however, over a standard 1080p to 4K comparison. Sharp’s Quattron+ is able to upscale existing 1080p content, as well as display native 4K content, a fact that Sharp is proud to mention. While Quattron+ won’t look quite as sharp with 4K content as a native 4K display would, it’s still an interesting value proposition for consumers that aren’t willing to pay the premium for a 4K HDTV, yet still want higher pixel density. You can expect the Q+ displays to arrive in 60, 70, and 80-inch varieties, and are divided into two product lines: UQ and SQ. The UQ line will boast premium features such as, AquoMotion 960, Super Bright, premium design, 3D with 2 pairs of glasses, 35W audio, and Bluetooth. THX certification will only be offered on the UQ line as well. The SQ line will omit these features, and only be offered in 60 and 70-inches. The Q+ displays will be offered at varying price ranges, starting at $2999 and topping out at $5999. 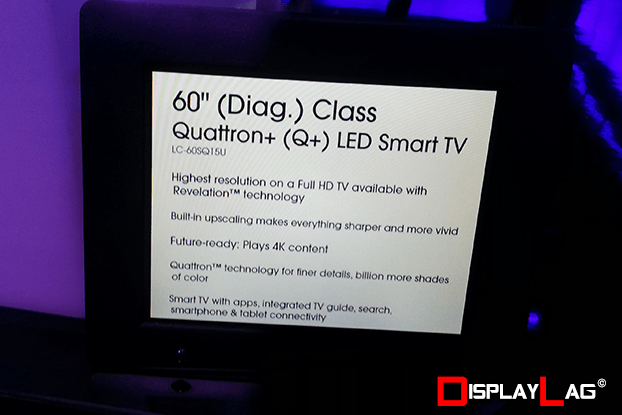 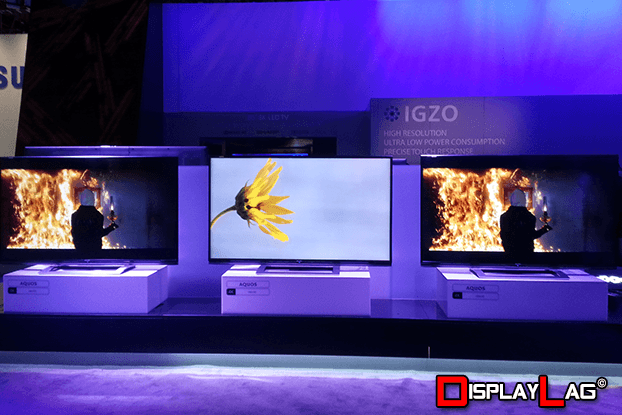 Sharp certainly had some great looking displays to show at CES 2014, but will they improve their input lag performance? Only time will tell.

Like every other manufacturer, Sharp also had their 4K line of HDTVs present at CES 2014. They will come in 60 and 70-inch screen sizes, feature 4 HDMI inputs, and are fitted with Active 3D displays operating natively at 120hz. THX certification also comes pre-fitted on Sharp’s 4K HDTV line, for those that need the extra assurance. There isn’t much else to say about the 4K line until the resolution becomes commonplace and content starts appearing to truly take advantage of the displays. As it stands, I felt like the 4K displays at Sharp’s exhibit were placed to show how close their Quattron+ HDTVs resembled the pixel density of 4K, at a fraction of the cost. Sharp’s 4K HDTV line will start at $4999 for the 60-inch version, and $5999 for the 70-inch.

For those that have kept up with our input lag database over the past year, you may have noticed that Sharp HDTVs haven’t exactly been ideal for gamers. The majority of the displays I have tested have been over 50ms in terms of input lag, even with game mode enabled. It’s interesting this is the case, as Sharp used to use a technology called Vyper Drive with the sole purpose of reducing/eliminating input lag in displays. I presented this dilemma to some of Sharp’s senior staff at CES 2014, and the good news is that they’re willing to improve in this area if given the resources. Whether or not this will come to fruition will ultimately be revealed over time. Speaking as a gamer, I would love to be able to use a display like the Quattron+, with lower input lag than what is currently offered by Sharp’s product line. 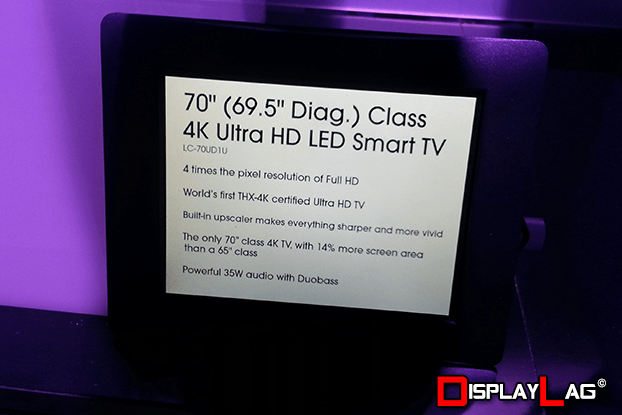