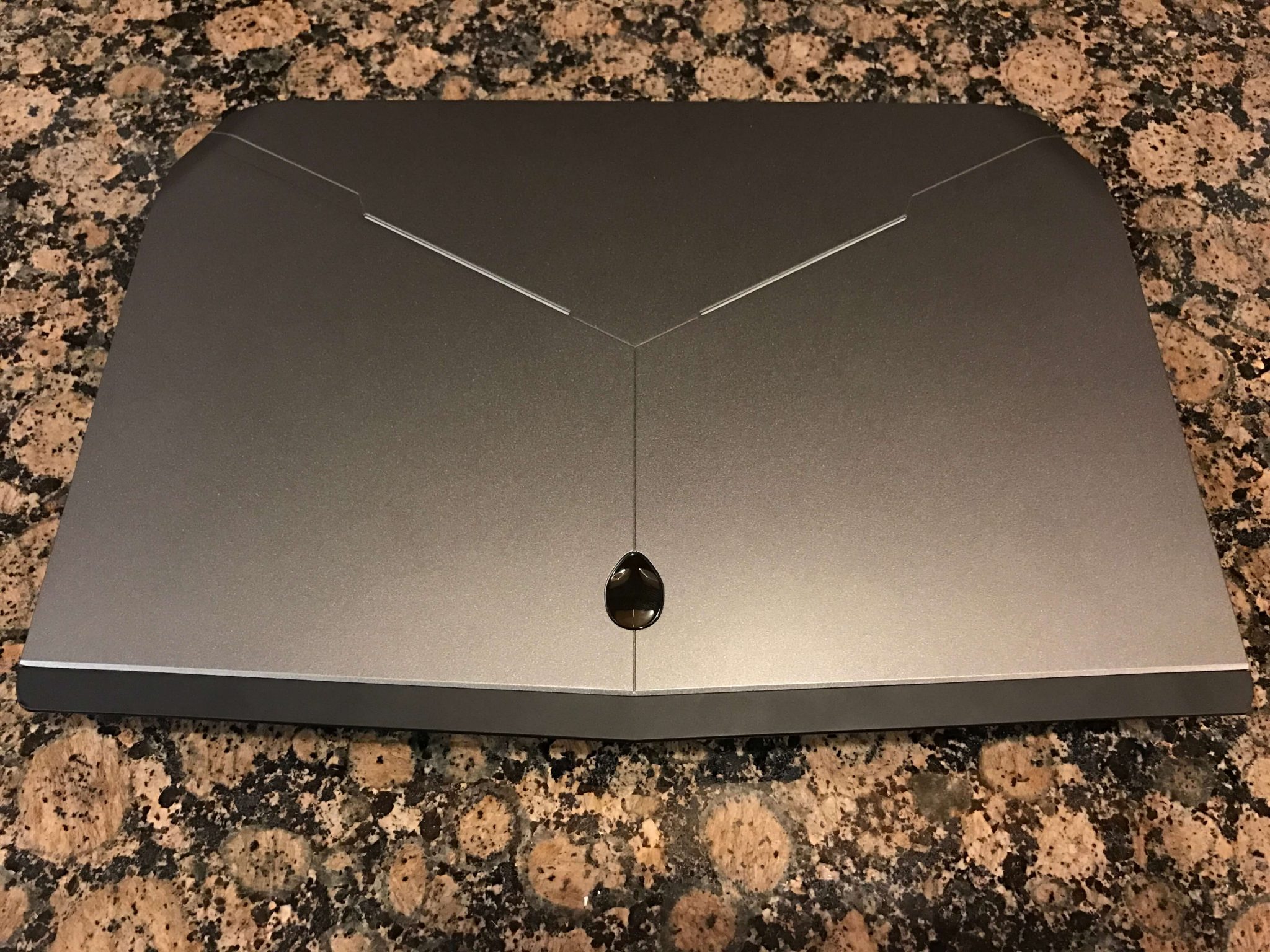 Being no stranger to the gaming laptop market, Alienware has been producing portable gaming machines for several years now. The most notable advancements in this area include high resolution, variable refresh rate displays such as G-SYNC and beefier graphics cards with lower power consumption. Alienware brings something new to the table that separates it from the rest of the pack, with an inclusion of a gorgeous OLED touch display that is guaranteed to impress newcomers to this technology. Armed with an NVIDIA GTX 965M GPU, Intel i7-6500U CPU and 8GB of RAM, this laptop packs enough punch to serve as a mid-range gaming solution while maintaining portability. But is it any good? Read on to find out.

The build quality of the Alienware 13 OLED is quite sleek. It is encased within silver anodized aluminum and sports a carbon fiber frame, giving it a light but substantial feeling to the touch. The outer case features customizable LED lighting that proudly exhibits Alienware’s branding when in use, and this LED lighting extends to the keyboard as well, giving it a uniform look. This LED lighting can be customized using Alienware’s properitary Command Center software, providing a multitude of RGB configurations to tailor at will. The wrist rest provides decent comfort when typing, however it is quite prone to fingerprints, so make sure to keep a cleaning cloth handy. The laptop weighs just under 4.5 lbs, with measurements clocking in at 1.1 x 12.9 x 9.3 inches (height x width x depth). This is by no means a slim laptop when compared to other laptops within the 13″ market. Rubber feet are placed below the laptop to provide adequate grip on most surfaces. Heat dissipates through the bottom grills and rear fans behind the display, which can scorch your thighs if you’re gaming on your lap. 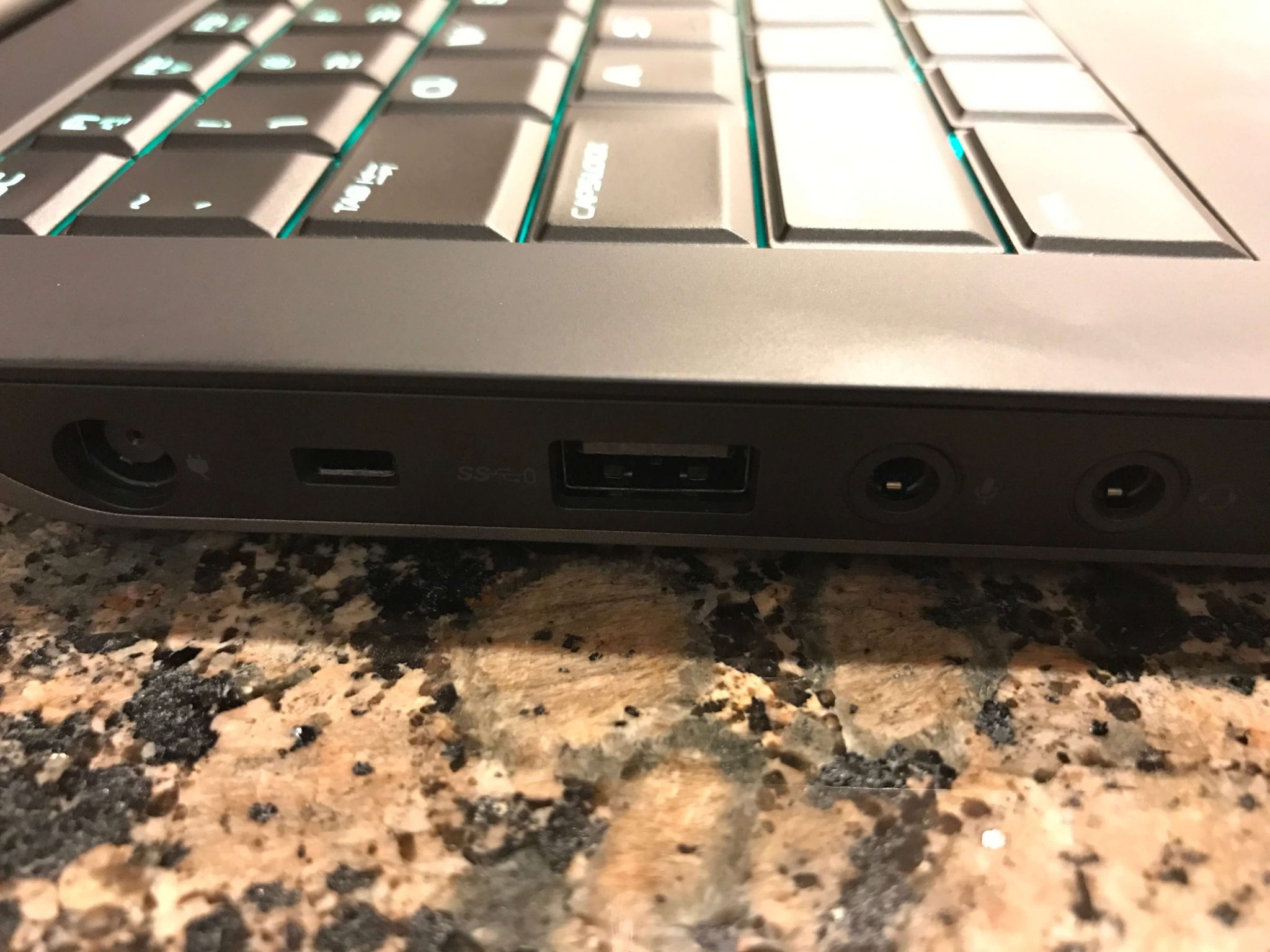 Klipsch stereo speakers are provided on the sides of the unit, which are a step above most cheap laptop speakers on the market. As the speakers fire directly from the sides of the Alienware 13, stereo separation is quite good, allowing for immersive media consumption. They still won’t provide a high quality listening experience when compared to a dedicated headphone setup (the low-end is barely noticeable), however they do get the job done for general listening. The included Creative Soundblaster SBX Pro Studio software allows for a variety of EQ balancing and sound customization options, including surround processing, which is quite useful if you have a pair of headphones with decent soundstage. For purists, you will want to leave these customization options disabled, as they can color the intended audio experience. 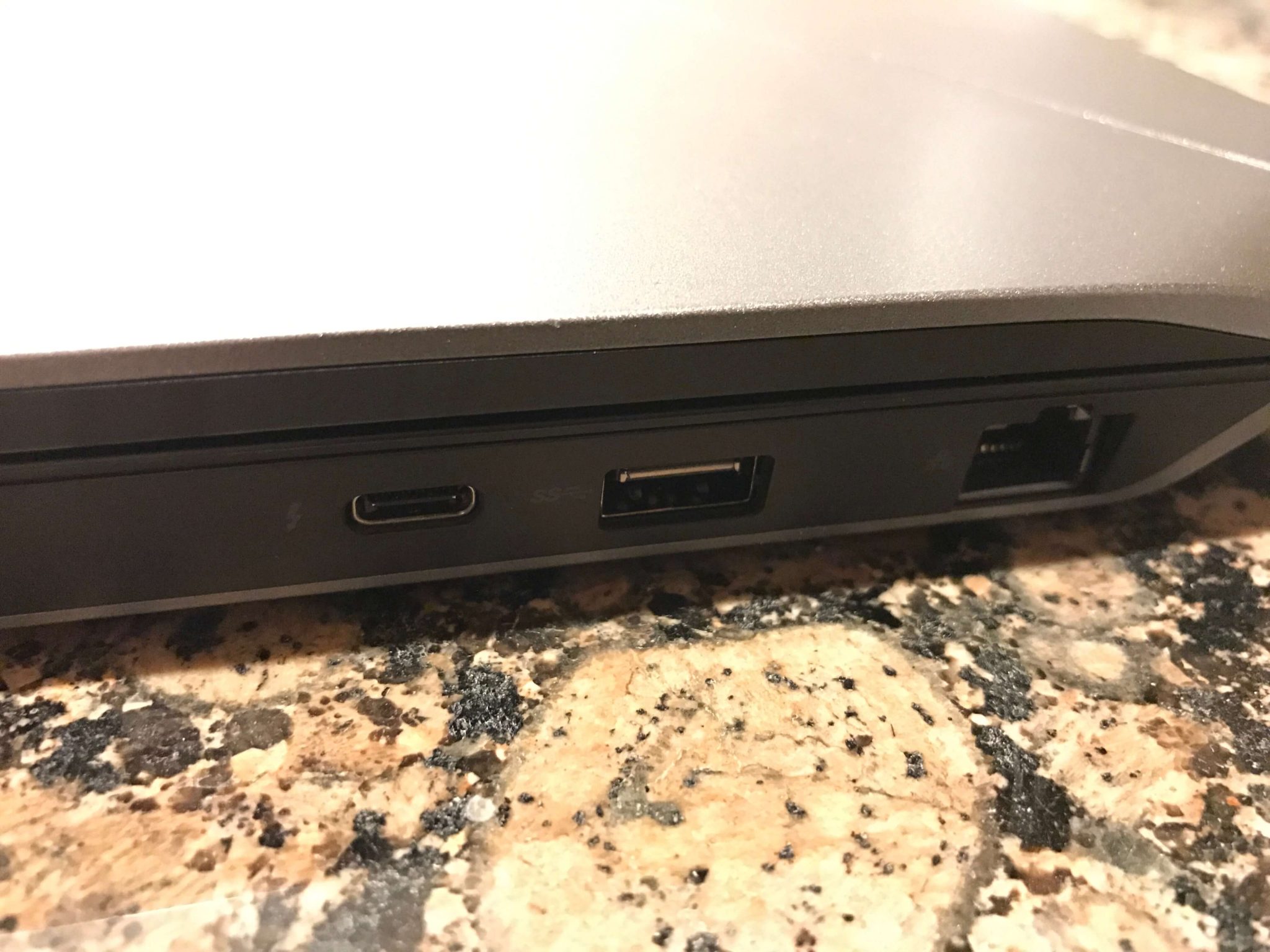 Alienware’s TactX keyboard is extremely comfortable for long typing sessions, and provides a very satisfying soft “bounce” to the keys even when typing fast. The actuation point is a bit deeper than a MacBook Pro, and is very comfortable even when nail-typing, something that can be troublesome with hard plastic keys. The keyboard is illuminated with RGB lighting for night time usage, and can be customized using Alienware’s Command Center software to achieve a personalized look. The cushioned typing experience is one of my favorite things about the Alienware 13, allowing me to type for hours on end without any noticeable decrease in typing speed. The trackpad, on the other hand, is your standard plastic affair that feels slightly wobbly to the touch, and doesn’t inspire as much confidence as the keyboard. The actual functionality of it was good overall, and it responded to my taps and scrolls adequately. It just doesn’t feel as smooth as it should when compared to Apple’s trackpad offerings. 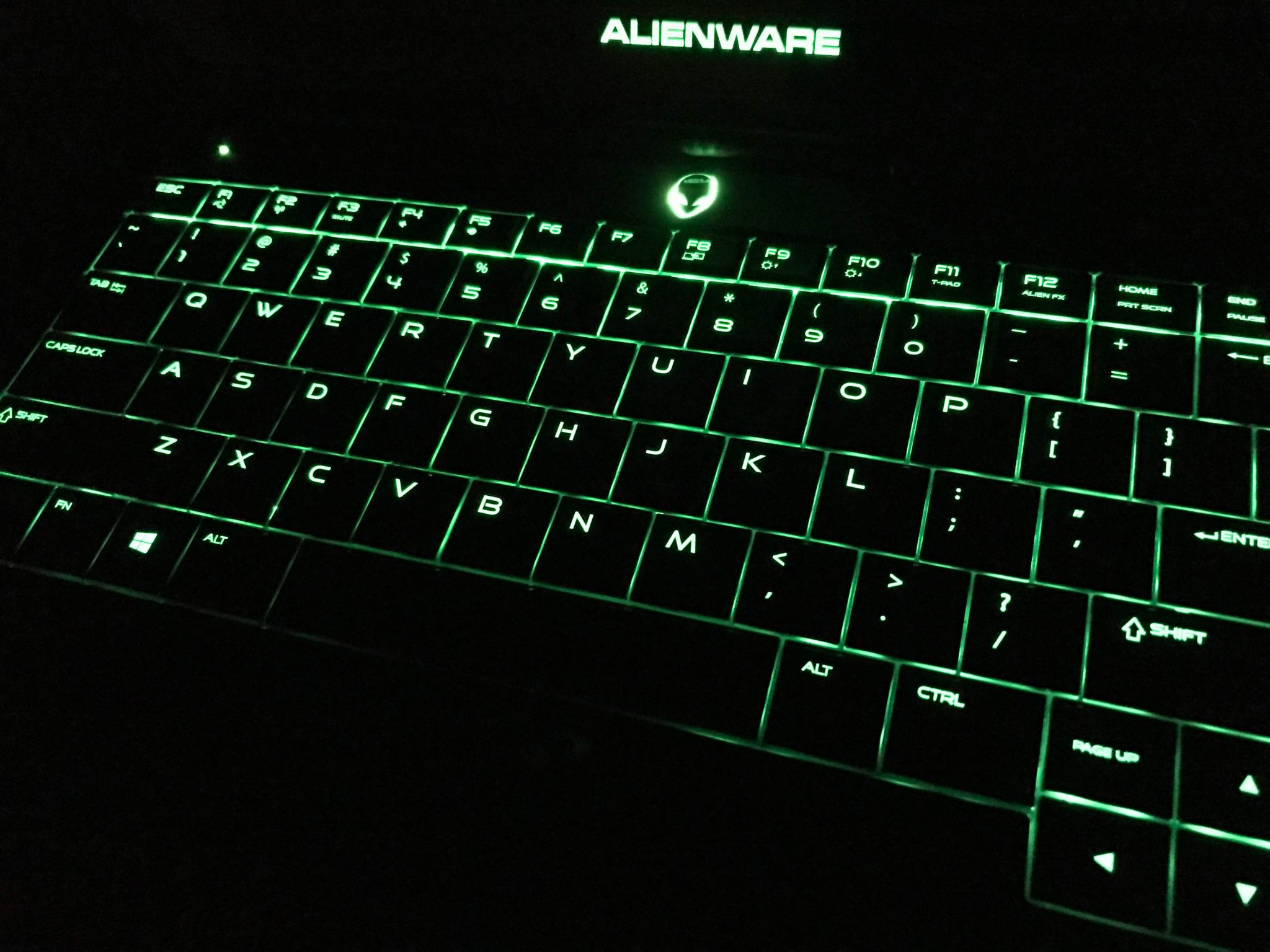 Our review unit came fitted with an Intel i7-6500U dual core CPU clocked in at 2.50 Ghz, an NVIDIA GTX 965M GPU, integrated Intel 520 GPU, 8GB of DDR3L RAM, and a 500 GB mechanical hard drive. The RAM and HDD are user-replaceable, and can be accessed via the bottom of the unit. The 500 GB hard drive that came pre-installed in this unit was promptly discarded in favor of a 256 GB Samsung 840 PRO, in order to maximize Windows 10 OS performance and portability. The last thing we need is a corrupted hard drive when bouncing the unit around, after all. The built-in Killer Network wireless adapter supports the latest AC wireless standards at 2.4 Ghz and 5 Ghz, which performed well streaming 1440p YouTube videos and traditional downloading. Rounding up the package, two USB 3.1 ports and one USB Type-C port serve as your main data transfer options, along with Bluetooth 4.1, an ethernet port, and headphone/microphone jacks. Video can be outputted to an external display via a HDMI 2.0 port on the rear of the laptop. The rear of the laptop also provides a proprietary connector for Alienware’s Graphics Amplifier, which allows you to connect a dedicated desktop GPU to power the laptop. While a neat feature, I feel that most users will game on this machine without carrying bulky add-ons. 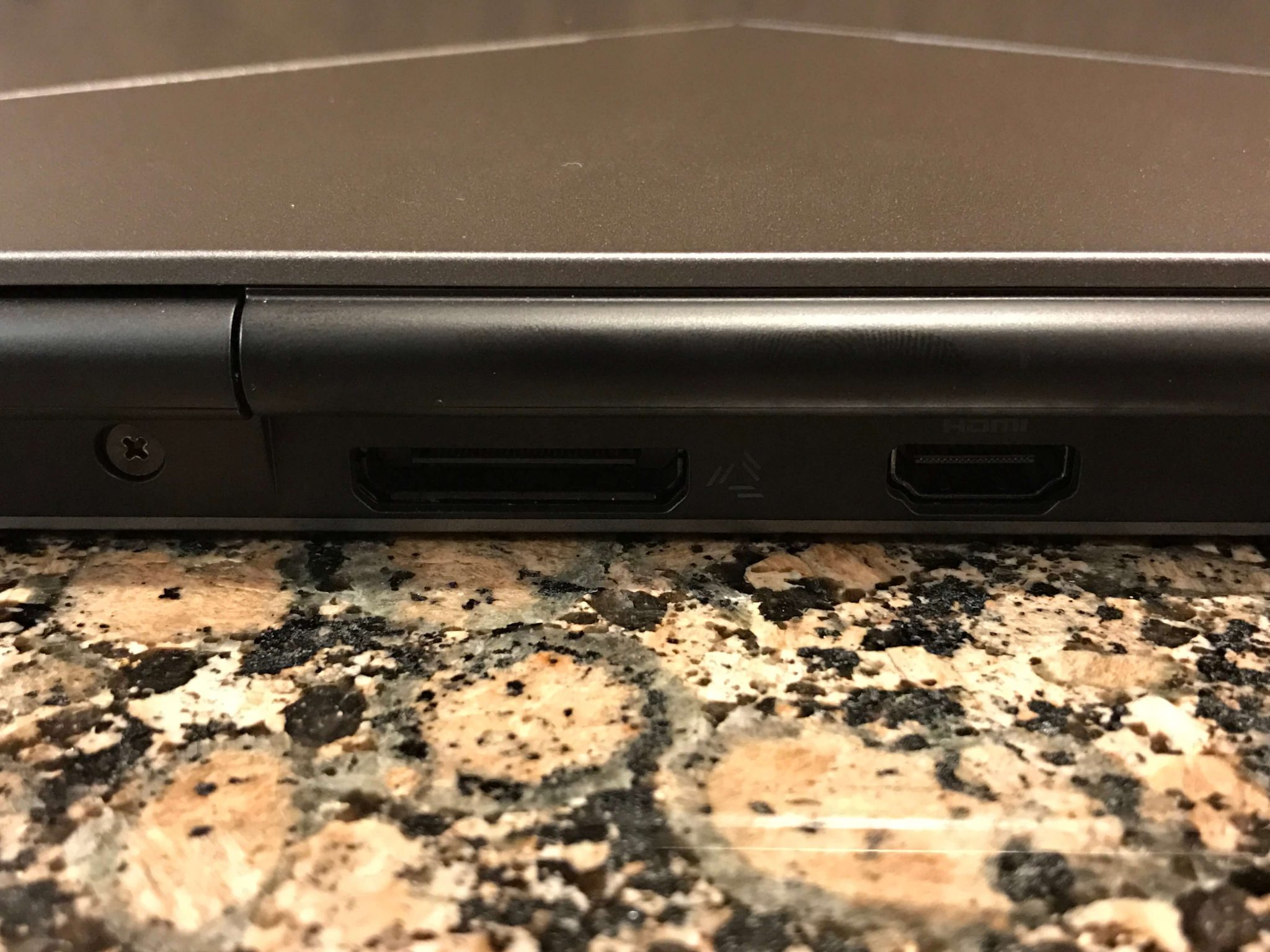 In terms of performance, the i7-6500U proved more than capable at handling day to day tasks without delay, opening several Google Chrome tabs at once while streaming HD Twitch/YouTube videos at the same time. The processor is capable of handling more intensive editing programs as well, however it won’t match the performance of a true quad-core modern i7 processor found in high-end laptop or desktop configurations. If you’re looking to own a laptop that can provide the fastest rendering times for programs such as Adobe Photoshop or Premiere, it would be more beneficial to browse laptops fitted with the quad-core i7-6700HQ instead. The i7-6500U is part of Intel’s 6th generation Skylake ultrabook CPUs, aimed at providing good performance without a lot of power consumption. The NVIDIA GTX 965M GPU found in our configuration is utilizing NVIDIA’s Maxwell architecture used by many of their 900 series graphics cards, offering a mid-range gaming experience depending on the frame rate and image quality you desire while gaming. 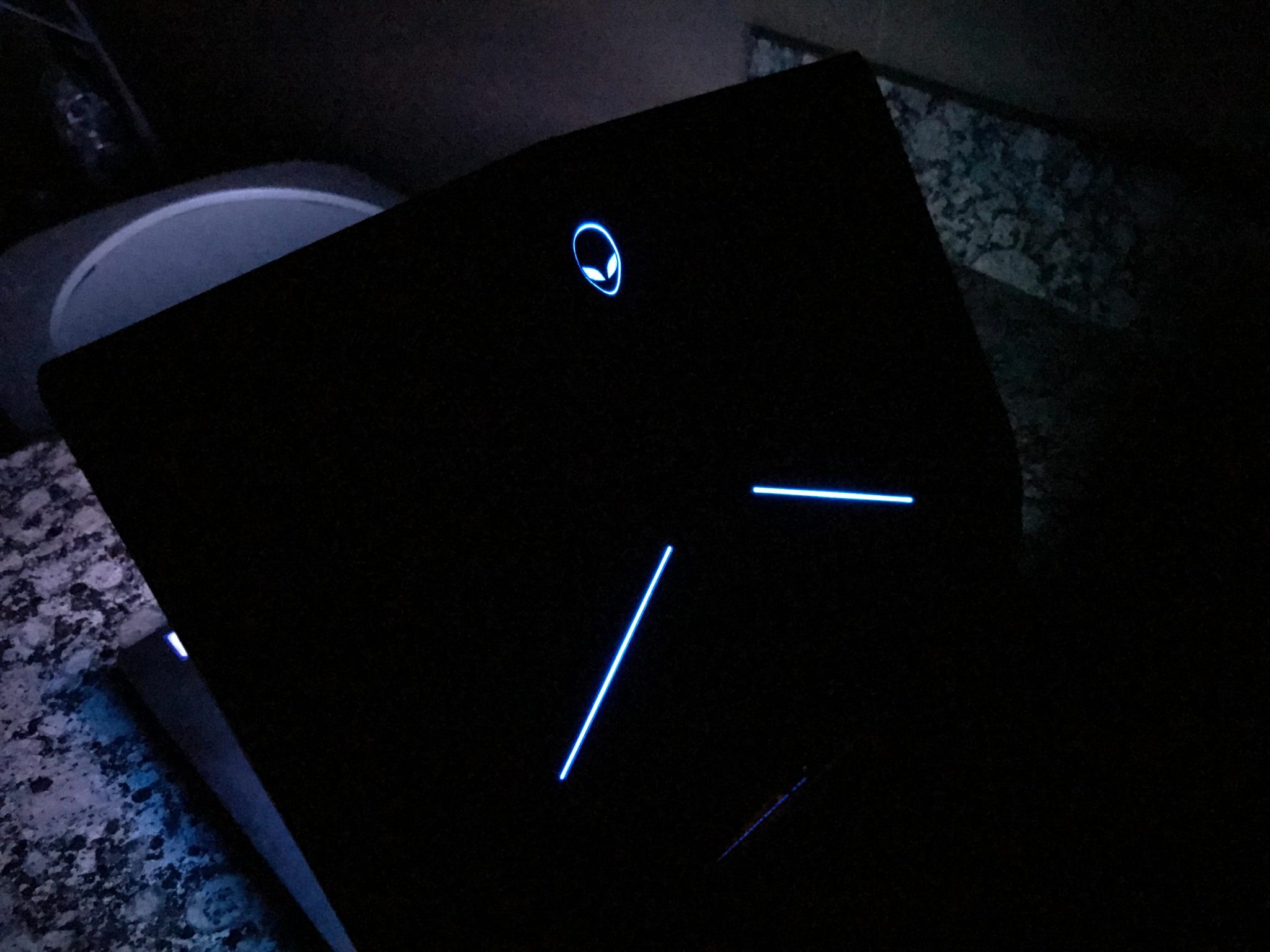 Touching more on the gaming side of the equation, I spent some quality time with the Alienware 13 testing a few games to discern their performance on this machine. First up, I booted up Batman: Arkham Knight with the latest patches installed. The game automatically set in-game resolution to 1920 x 1080 for optimal performance, with texture resolution, shadow quality, and level detail settings set to Normal. Motion blur, anti-aliasing, chromatic abberation, and film grain were also enabled, though all of NVIDIA’s propietary GameWorks options were turned off. While free-roaming the streets of Gotham, gaming performance hovered around 30-60 FPS in most cases, providing a very playable gaming experience without sacrificing much graphical detail. The in-game benchmark reported a minimum FPS of 36, and an average frame rate of 45 FPS. You can squeeze more frames by disabling V-Sync, however this will result in noticeable screen tearing which may not be ideal for most users.

Mortal Kombat XL also provided a great gaming experience, running at 1920 x 1080 resolution with all settings dialed to medium. I manually changed anisotropic filtering to 16x and switched V-Sync to Fixed, as most competitive fighting game players will want to mimic the experience found on game consoles for tournament play. With these settings, the in-game benchmark reported a locked 60 FPS with no frame drops in sight. I confirmed this by playing some local matches against the CPU and the overall experience was pleasant, without any noticeable performance problems. A similar story was painted with Street Fighter V as well, maintaining a stable 60 FPS at 1920 x 1080 resolution and medium settings. For a game like Street Fighter V that has a vibrant and punchy art style, the OLED display does wonders in highlighting it. There is a bug with Street Fighter V that causes the game to crash when played on touchscreen laptops however, which requires the user to manually disable the touchscreen via device manager at the present time. 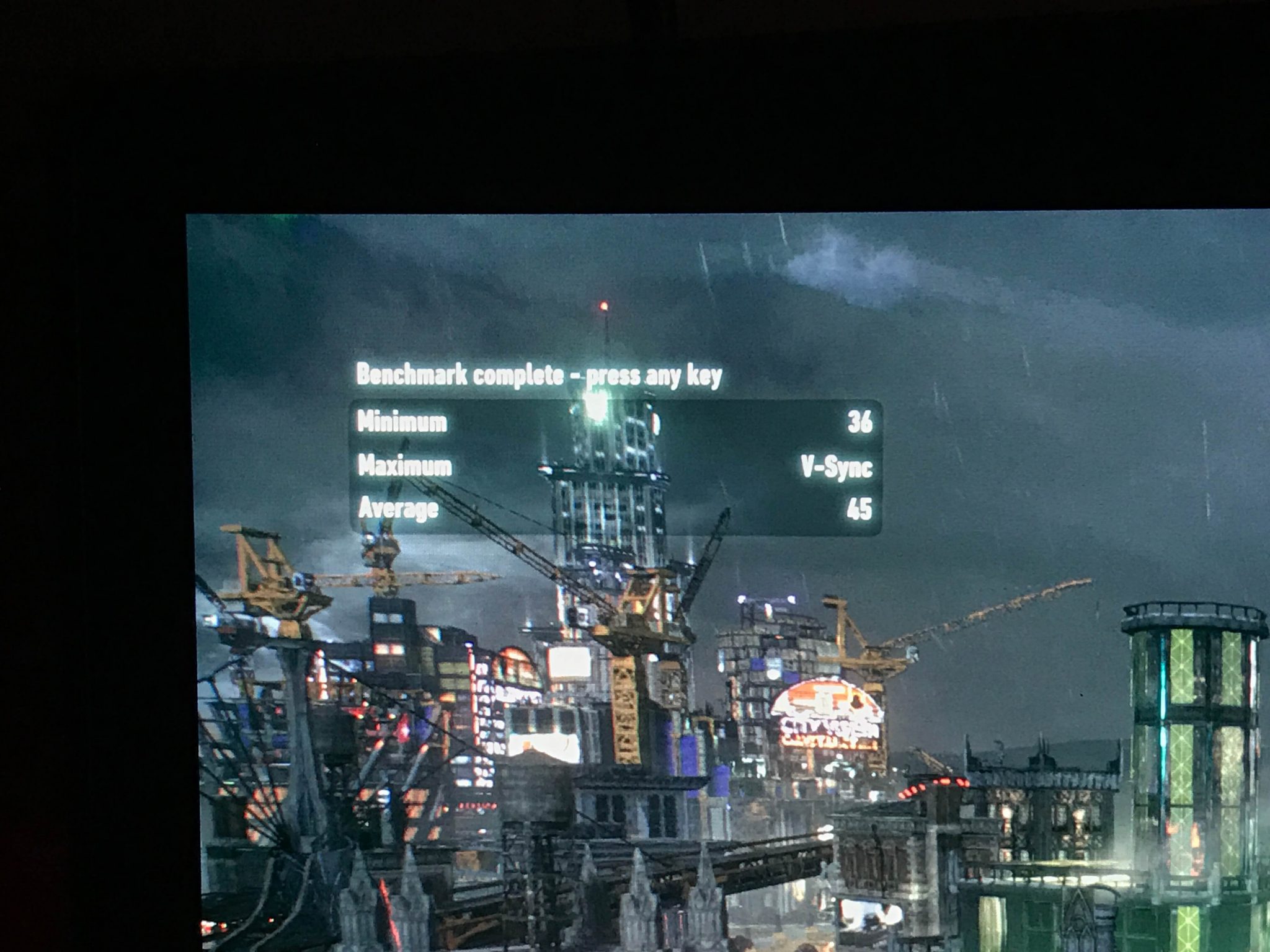 Thus, we arrive to the major selling point of this laptop: the stunning OLED display on the Alienware 13 R2. Most of our readers have likely become accustomed to various forms of LCD technologies as their main choice of display, with LED leading the pack in terms of popularity. While modern LED displays do a good job at providing an immersive experience, there are certainly drawbacks to the tech. By far the biggest issues that plague modern LED displays are slow response times, poor black levels, limited color gamuts and viewing angles. These issues can be alleviated significantly as your budget increases, but it’s not possible to completely solve these issues (at the present time). Anyone who has seen an OLED display in action can discern the benefits immediately; colors pop, contrast ratio is extremely high, and response times are excellent. Want to view it at an angle? No problem. It’s hard to convey the massive difference through words, and simply needs to be seen to be believed.

Alienware simply outclass most of the competition with its 2560 x 1440 QHD OLED display, and you will be hard-pressed to find problems with it. On top of its gorgeous looks, it also serves as a touchscreen to navigate through daily tasks. Its advertised 1ms response time provides nearly blur-free imagery without the nasty artifacts that tend to be associated with overdriving TN LED monitors. Not everything is rosy about the display, however. The colors on the Alienware 13 aren’t set to accurate levels out of the box, and do appear more biased towards green/blue than they should be. Color saturation is also quite high, and requires tweaking in order to maximize color fidelity. For those used to Samsung OLED smartphones, you will feel right at home. For everyone else, calibration will be necessary in order to achieve the best picture quality from the Alienware 13 R2 OLED. 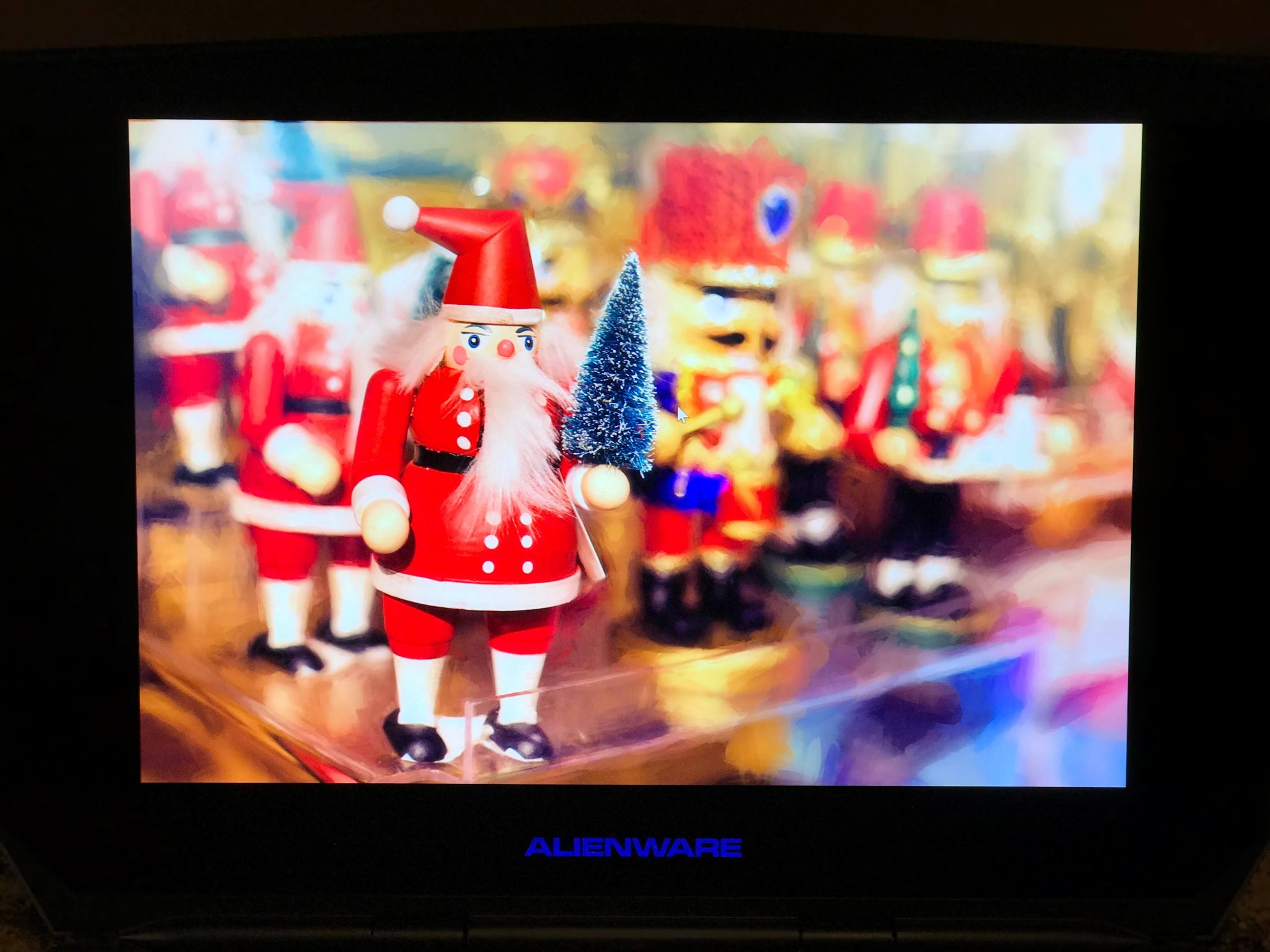 It’s not just the visual quality, either. For an optimal gaming experience, it is imperative for a good gaming display to feature low input lag, allowing you to stay in sync with the action. It’s one of the biggest “bummer” moments for serious gamers to spend hours shopping for the perfect display, only to be bogged down with immense input lag that ruins everything. Prior to conducting an input lag test, I spent quality time with Street Fighter V on this laptop to get a feel for its responsiveness. To my surprise, the display felt extremely responsive. Testing the display confirmed my initial feedback, with the OLED display clocking in an average input lag of 4.8 frames within Street Fighter V, which is an excellent result! This result essentially confirms that the OLED display within the Alienware 13 is not contributing any noticeable input lag on top of the game engine, so you can rest assured that your inputs will render as fast as possible. It’s a rare sight to game on an OLED display without noticeable input lag, as even the most expensive OLED HDTVs currently suffer from input lag woes.

The battery life, however, is one of the weaker aspects of the Alienware 13 R2. On normal usage where the GTX 965M isn’t being utilized, you can expect between 5-7 hours of usage depending on the content displayed on your screen. Unlike LCD displays, OLED displays gain battery savings when displaying black or darker colors, and drain faster when bright colors are shown. When gaming, this number is significantly reduced, lasting between 1.5 to 3 hours depending on the intensity of the game. You can expect the Alienware 13 R2 to last through 2-3 movies depending on their length. Luckily, the charger isn’t excessively bulky, so it’s advised to keep it handy. 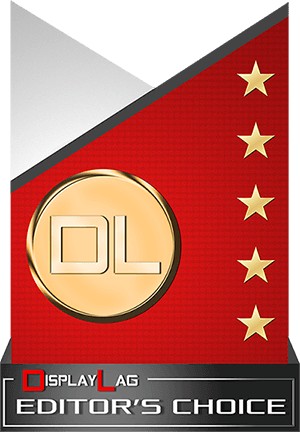