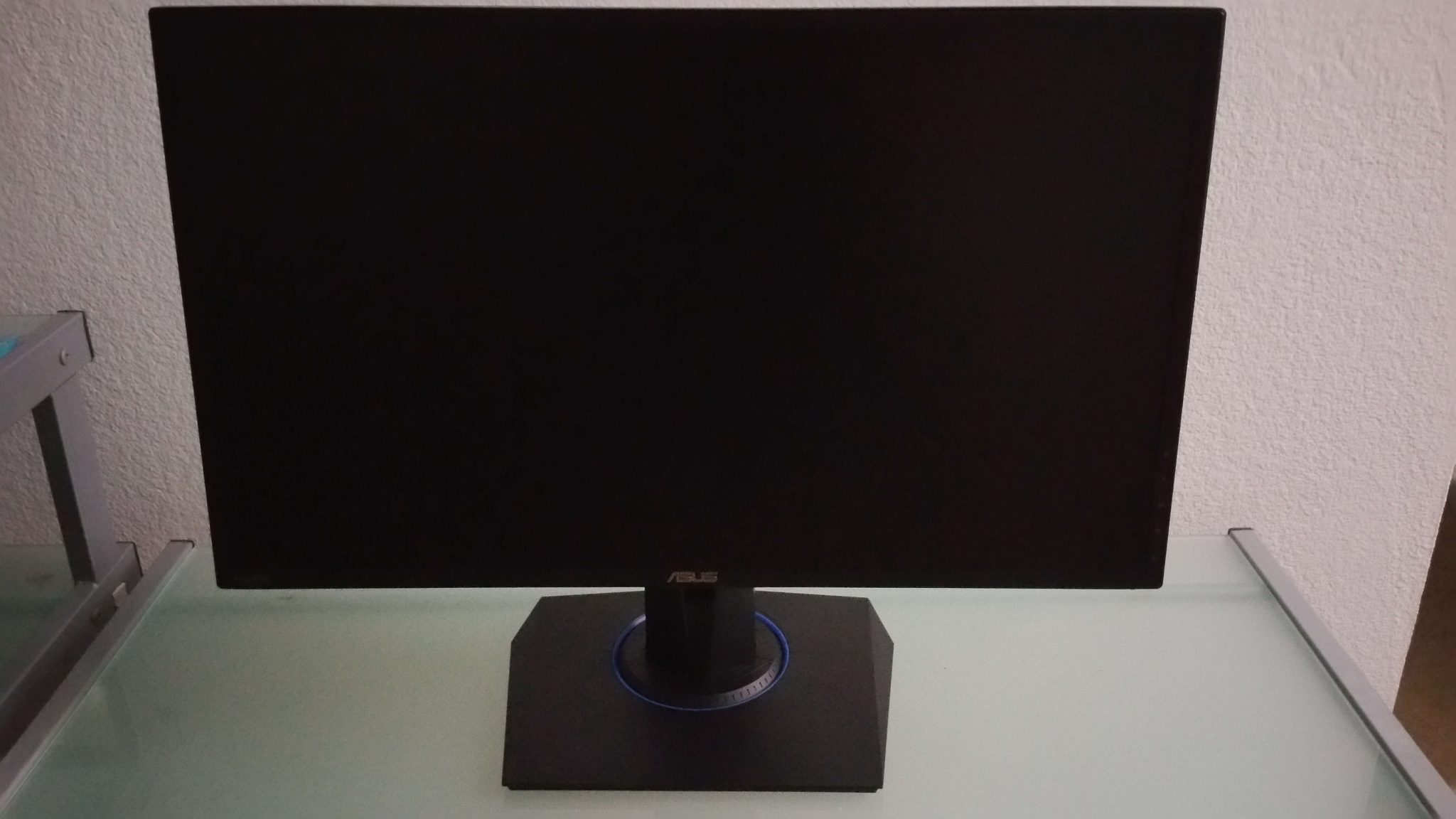 We’re back again with another ASUS monitor review! ASUS is no stranger to making some of the best gaming monitors on the market, aiming to have a low lag screen for every budget. Since ASUS revitalized their gaming lineup with the PG278Q, we’ve been seeing their new monitors follow this monitor’s design philosophy. Not long ago, we reviewed their excellent MG24UQ, a FreeSync monitor with a 4K resolution and IPS display. The VG245H is their latest addition to the entry-level gaming market, featuring a 75hz FreeSync TN panel, 1080p resolution, and 1ms GTG response time. 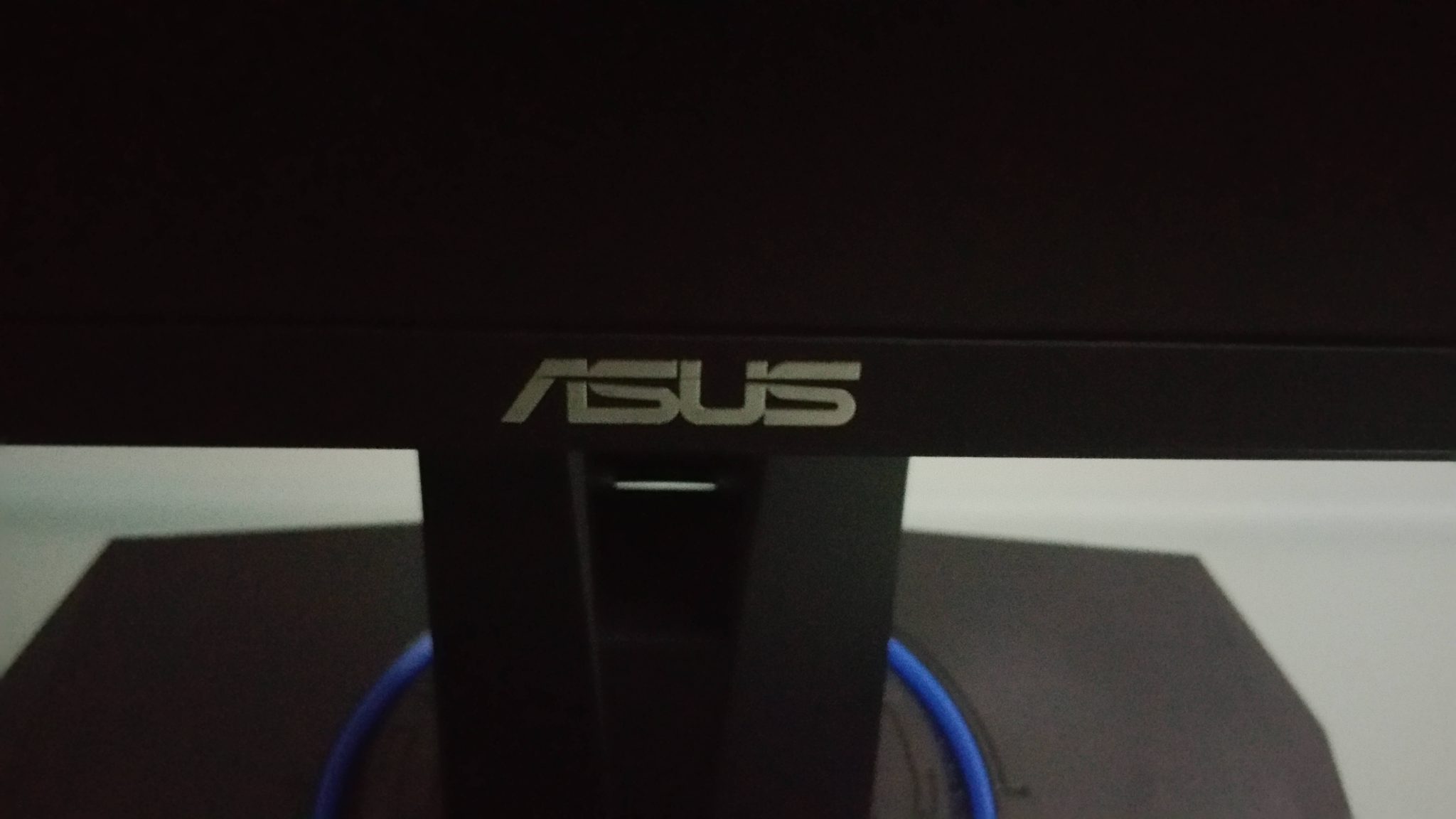 The VG245H borrows its design from the MG24UQ and PG278Q with some minor aesthetic changes. It no longer features a gray and red color scheme that’s synonymous with ROG branding, sporting a black chassis and blue accents instead. The monitor features a matte finish all the way around, which doesn’t appear to catch fingerprints easily. The bezel of the monitor is very thin, which gives the VG245H a very sleek look on your table. The overall build is solid and quite attractive. 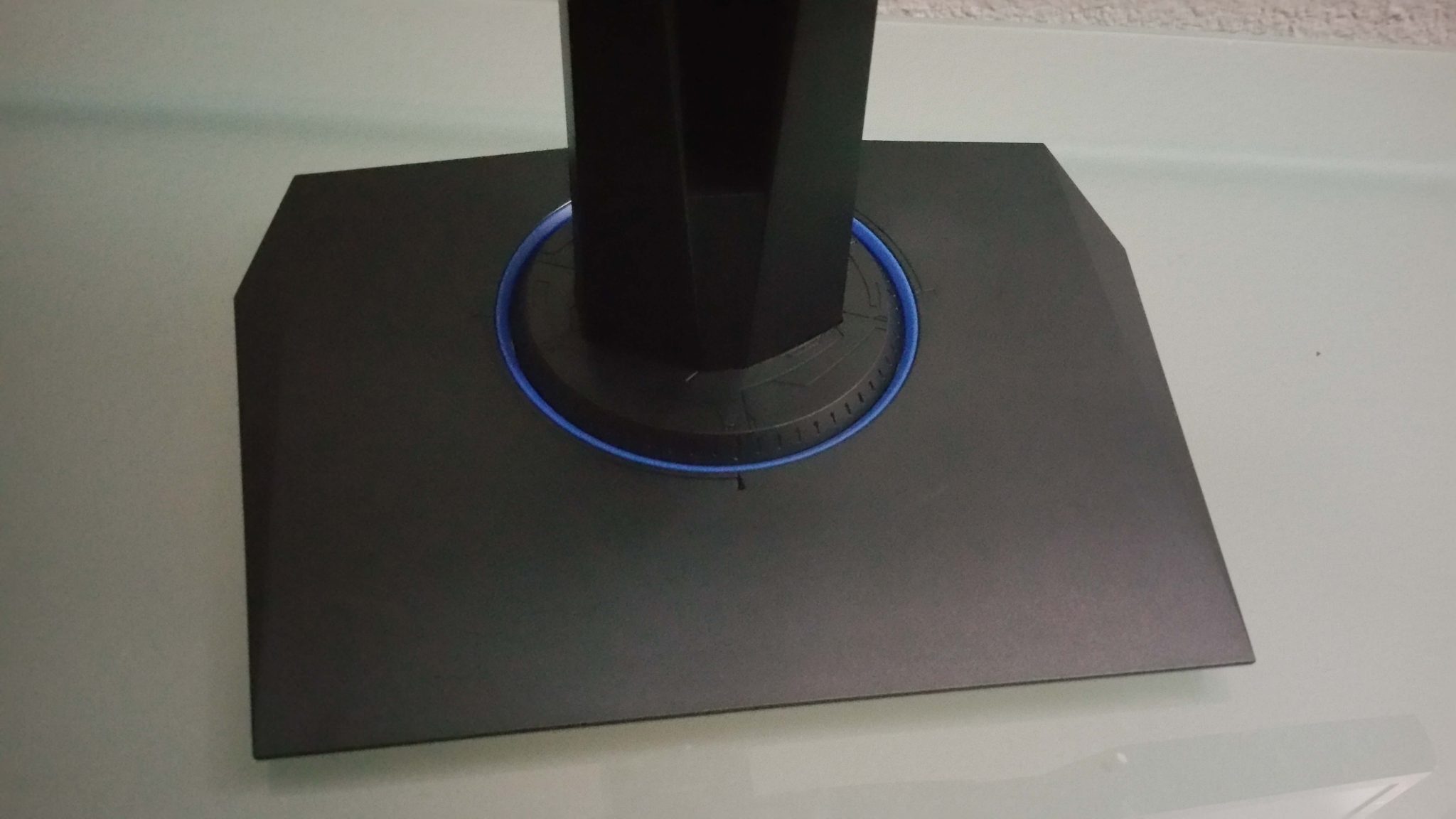 The base does a good job with its septagon-style footprint to keep the monitor stable. The VG245H features full rotation, height/angle adjustment, and portrait orientation capabilities, allowing you to customize the monitor for almost any setting. This is particularly important for TN panels, as TN panels require optimal viewing angles to make the most of their picture. Overall, I have no complaints with the VG245H’s build quality. It’s a step above most monitors in its class. 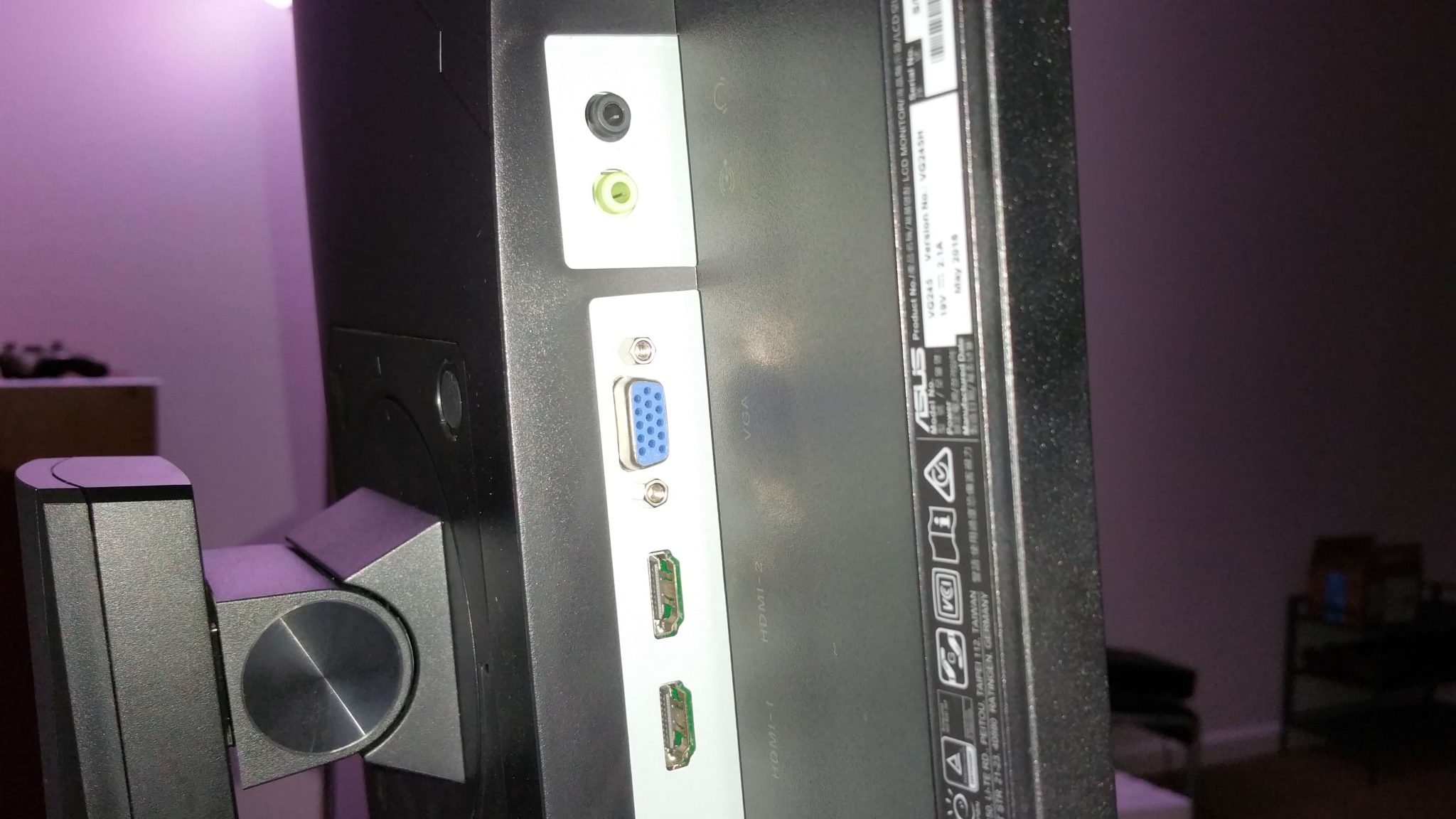 The VG245H comes with dual HDMI inputs, D-Sub, and a headphone jack/line in as your main connectivity options. With HDMI cemented as the main form of connectivity for most users, DVI and other legacy connections are slowly being removed from monitors. I would have liked to have seen at least one DisplayPort connection, as it would have complimented the dual HDMI inputs nicely. As it stands, the VG245H offers enough connectivity to connect two consoles, or a single console and a PC. You’ll need a PC with an AMD GPU in order to advantage of FreeSync in this monitor. Stereo speakers are included on the VG245H, and do a good job at fulfilling basic audio requirements. Be sure to invest in an external audio setup or a headphone/amplifier combo if you’re looking for more premium audio.

The VG245H borrows design cues from the MG24UQ and PG278Q in this area as well, featuring an assortment of buttons, as well as a joystick for OSD operation. The VG245H features four buttons that function similarly to most monitors on the market, however the joystick also acts as a button to serve quick menu operation. Thanks to ASUS’ low-lag OSD, you will rarely have to use the other buttons, as the joystick can accomplish everything by itself quickly. I had no major issues operating the VG245H. 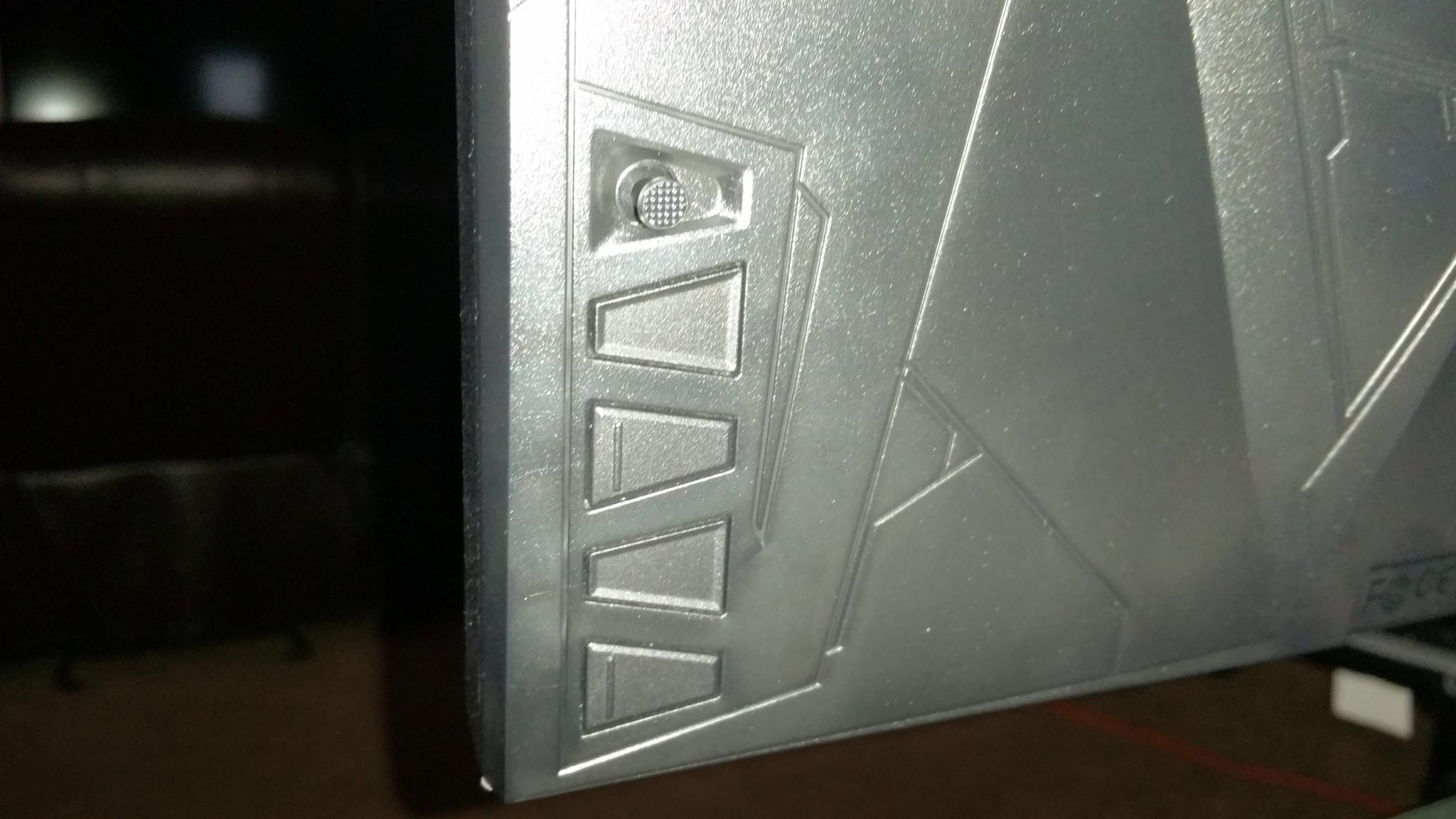 ASUS has provided a plethora of options to configure the VG245H. Most of these options are common among other monitors, though ASUS provides some specific tweaks related to gaming with their GamePlus implementation (which includes Crosshair, Timer, FPS counter, and Alignment). For monitor configuration, ASUS provides a Blue Light filter, as well as full controls to calibrate settings such as brightness, contrast, and color temperature. To see the full list of OSD functions, check the gallery below: 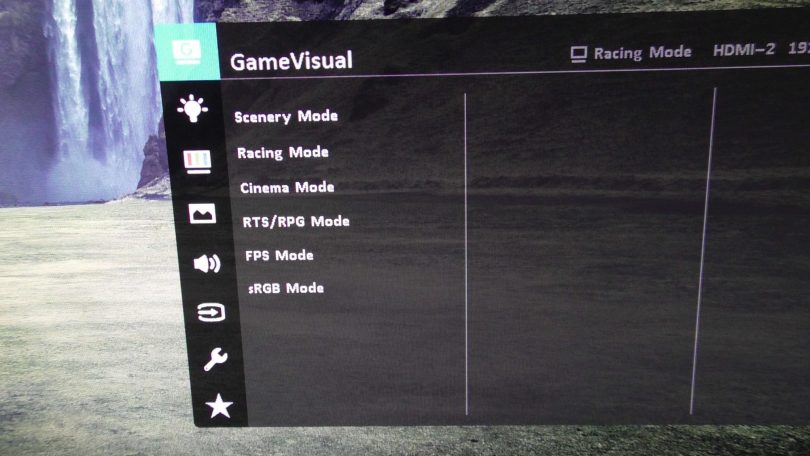 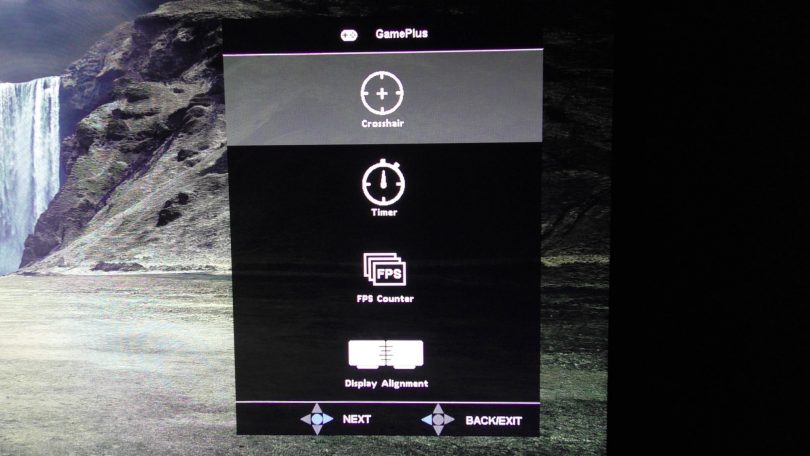 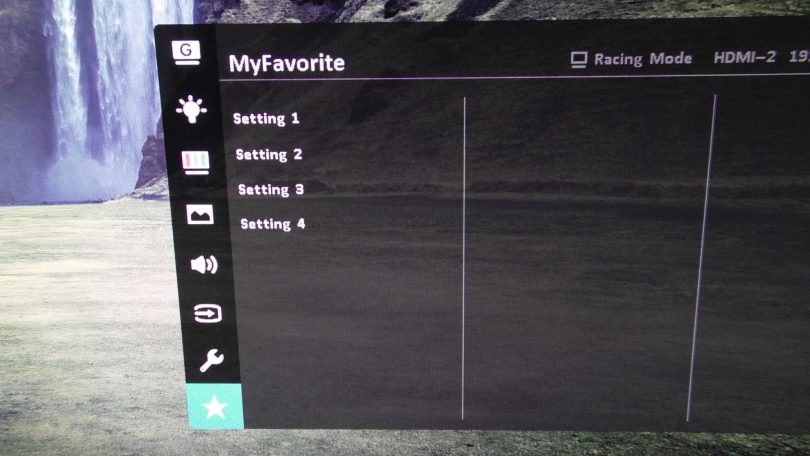 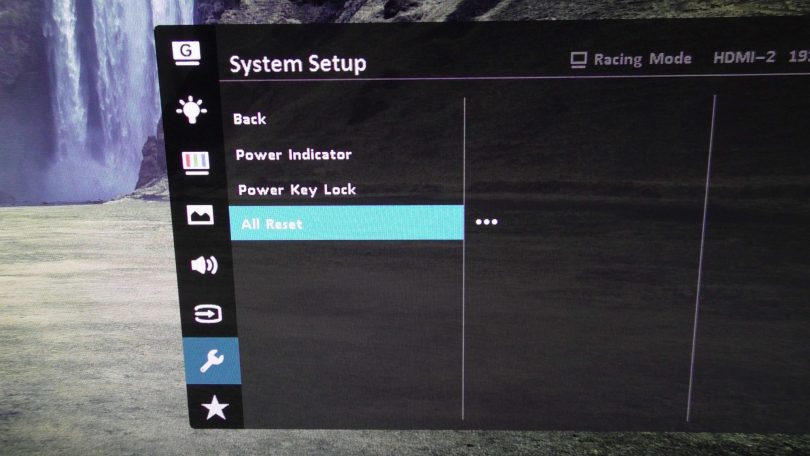 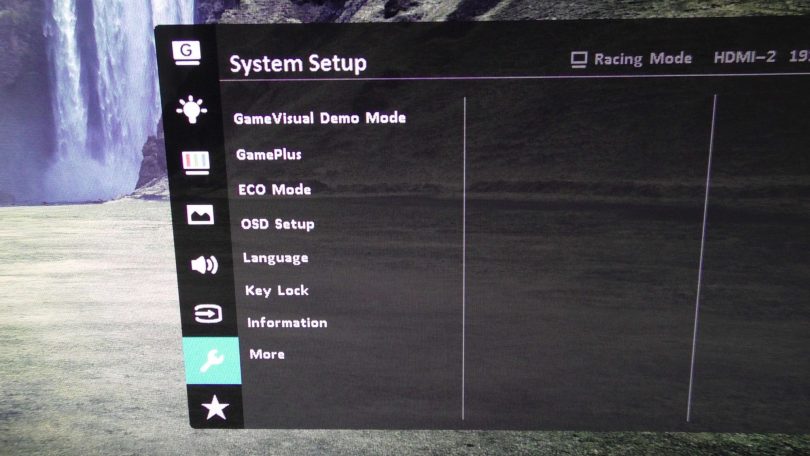 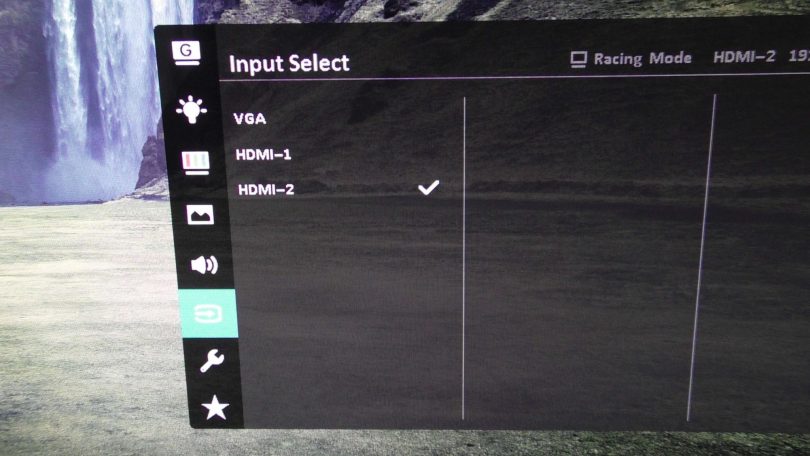 Panel uniformity is an important factor when purchasing a LED monitor, as poor uniformity can severely hamper your viewing experience. It can also vary among different panels of the same model, so our results only cater to our specific sample. Our VG245H sample was calibrated to achieve approximately 120 cd/m² luminance and 6500 K color temperature. We then measured 9 areas of the screen using our i1 DisplayPro colorimeter to get an idea how much variance we can expect among different parts of the screen. In terms of color temperature, the largest deviance from the center point appear to be on the top left and bottom right portions of the screen, with a deviance around -200K. The luminance of the panel sees the largest device along the top of the screen, with the top left portion seeing a -9% deviance from the center luminance.

Out of the box, the ASUS VG245H comes with an assortment of preset picture modes, with the default picture mode being an oddly-named “Racing” preset. This preset at first glance didn’t appear to stray too far from the 6500K target color temperature, so we used this as the base preset for calibration. As mentioned in our uniformity test, we calibrated our VG245H sample to 120 cd/m² luminosity and 6500K color temperature. The default contrast setting of 80 was slightly high out of the box, clipping some white details. We lowered this setting to 73 in order to achieve better definition in Lagom’s contrast test. Sharpness is blanked out in this preset, however there wasn’t a need to adjust it. After calibrating to 120 cd/m² luminosity, we measured a black level of 0.12 cd/m², which is decent for a TN panel. TN panels require good eye-level placement, as they are very prone to gamma shifts depending on your viewing angle. As a result, TN panels aren’t advised for any kind of professional work. An IPS panel will suit you better in this regard. After calibration using OSD controls and our ICC profile, we managed a static contrast ratio of 993:1.

Below are the measurements for the VG245H after configuring OSD controls and using Windows’ default sRGB profile. The data below showcases the deviance from our calibrated ICC profile: After applying our ICC profile along with manual OSD configuration, we manage to hit our calibration targets: Note: These settings were achieved using an i1 Display Pro, along with X-Rite i1 Profiler and BasICColor software. The GPU used on this monitor was the AMD Radeon R7 260X, using stock settings. These settings require an additional ICC profile for accuracy. Use these settings at your own discretion, as they may look different on your display.[/tab] [/tabs]

The first thing I noticed about the ASUS VG245H is the claim of “LOW INPUT LAG” across the box in big letters, which is a new marketing shift for ASUS. Clearly, the main purpose of this monitor is to provide a low-lag gaming experience. Before doing any objective testing, I decided to spend a few hours playing Ultra Street Fighter IV for nostalgic reasons. My experience lined up with previous low-lag monitors such as the ASUS VH236H and BenQ RL2460HT; the monitor felt just as responsive in practice.

Using our dedicated lag testing equipment, I performed an input lag test at 1080p/60hz resolution (which is the native resolution of this monitor) to verify if the monitor indeed has low latency. All Game Visual modes on the VG245H produced identical input lag values, allowing you to use any picture mode without worry of additional latency. In the default Racing mode, I was able to yield these results:

Calculating the average of the above measurements results in an input lag of 10ms (rounded-up). ASUS claims that the VG245H features GameFast Input Technology, supposedly designed to reduce input lag. This doesn’t appear to be anything more than marketing speak, as the monitor doesn’t perform any different from other top monitors in our input lag database. With that said, you shouldn’t encounter any noticeable latency during gaming.

To enhance your gaming experience, the VG245H features FreeSync support for compatible AMD GPUs. The VG245H is the second monitor we reviewed so far to offer FreeSync capability with an entry-level price point. For those unaware, FreeSync serves as a direct link between an AMD GPU and a compatible monitor, designed to mitigate the drawbacks presented by V-Sync: input latency, stuttering, and screen tearing. The main downside to FreeSync is that it only activates within a certain FPS range, which varies by monitor. The VG245H has a FreeSync range of 40hz-75hz, meaning the benefits of FreeSync will only activate if your game’s frame rate (FPS) is within this range.

Dipping below or above this range will result in FreeSync being disabled, going back to traditional V-Sync implementation. AMD introduced Low Framerate Compensation (LFC) to extend the range of FreeSync’s capabilities beyond this limitation, however the technology only applies to monitors where the maximum refresh rate is ≥ 2.5x minimum refresh rate. Due to this requirement, the VG245H would not be able to take advantage of LFC. Using Radeon Crimson drivers, you can set a target FPS range in order to take advantage of FreeSync. FreeSync would operate best if you are able to keep your frame rates consistently above 40 FPS.  To get an idea of what FreeSync actually looks like, check out our demonstration video below:

The ASUS VG245H reports an advertised 1ms GTG response time, which should theoretically ensure smooth fast motion without distracting blur. Unfortunately, this isn’t quite the case. During my time with the VG245H, I was able to detect some motion blur during normal gaming sessions, which had me jumping straight into the menus to configure the Trace Free option (ASUS’ version of panel overdrive). While this mitigated some of the blur, I couldn’t find a perfect setting where it was imperceptible. The blur isn’t terrible; it’s still in line with other fast TN monitors on the market. It’s a step down from other TN panels such as the PG278Q, which performed admirably in fast-paced gaming. Setting Trace Free to 0 is quite frankly unusable, with massive amounts blur. I found the best balance to be Trace Free 60, which is the default setting that comes out of the box. Trace Free 80 introduces some minor artifacts without noticeable benefits. Trace Free 100 exhibits a large amount of artifacts on trailing objects, which is not recommended. To get an idea of what the different Trace Free settings produce, check the gallery below: