This AOC G2460PQU gaming monitor was provided by AOC for review purposes. I will be reviewing the build construction, picture quality, and overall technical performance of the G2460PQU.

AOC has been manufacturing monitors for quite a while. The G2460PQU is one of their latest additions to their lineup, being a full-fledged 144hz display to handle your gaming needs. Competing with some of ASUS and BenQ’s top monitors, the G2460PQU hits the right notes off the bat: it features a solid stand with plenty of weight for stability, as well as a unique brushed design along the casing itself. The monitor certainly doesn’t feel cheap, maintaining a minimal profile on your desk. 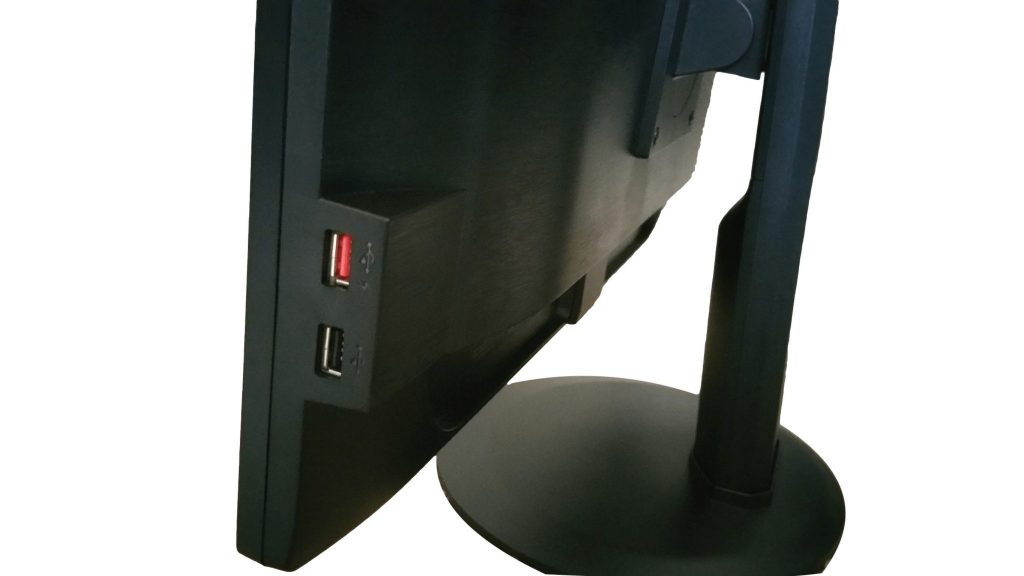 In terms of input connectivity, most users shouldn’t have any complaints. The G2460PQU comes fitted with VGA, DVI-DL, HDMI, and DisplayPort inputs. While only one HDMI input is present, the inclusion of the other ports should be more than enough for most users. Keep in mind that refresh rates higher than 60hz will require DVI-DL or DisplayPort connection. The monitor also features four USB 2.0 ports, which may prove useful for those running out of USB ports on their desktop. A headphone jack and line-out are supported for your aural needs, though I’d assume most users will be using their own external solutions to handle game audio. The specifications of the G2460PQU are quite standard. This monitor is capable of up to 144hz refresh rate, utilizing a 1080p resolution and TN panel type. The reported 1ms GTG response time ensures that your fast-moving images are relatively blur-free by LCD standards. 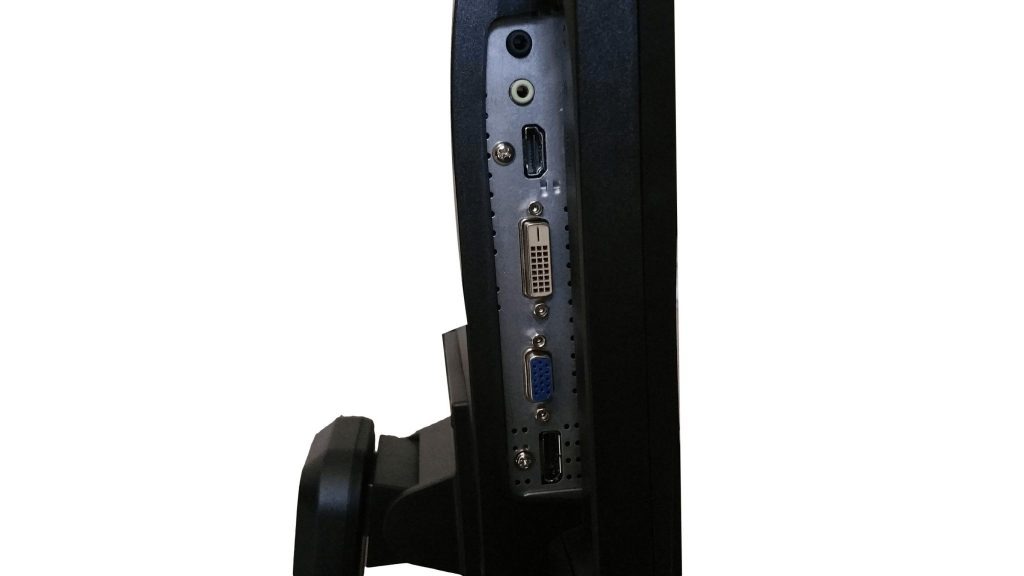 The buttons featured on the G2460PQU do their job admirably. Like most other monitors, each button has a predetermined function attached to it, which requires memorization in order to hit the right settings. I wish AOC implemented a way to see your selections on the screen itself, as it would aid darkroom usage significantly. Once you get past memorization quirks, the OSD handles quite well. The buttons are made of hard plastic, so don’t expect any surprises there. 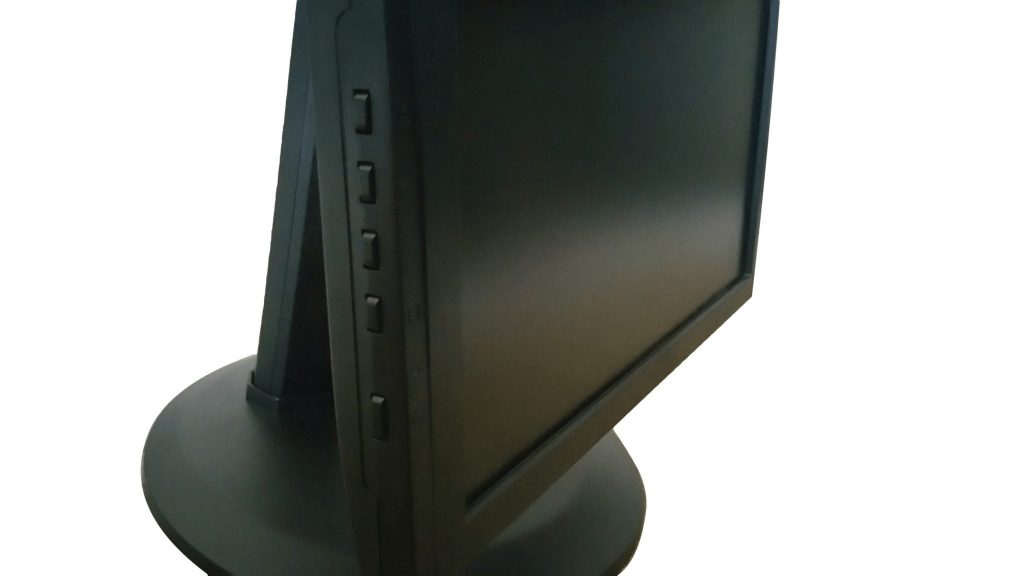 The menu system on the G2460PQU functions quite well, with no noticeable lag time between button presses. The monitor features several customization options that will satisfy the needs of most users. Some of these options include typical contrast, brightness, and gamma adjustments. Dynamic contrast ratio as well as panel overdrive can also be customized within these menus. To see all of the options available for configuration, please check the screenshots below: 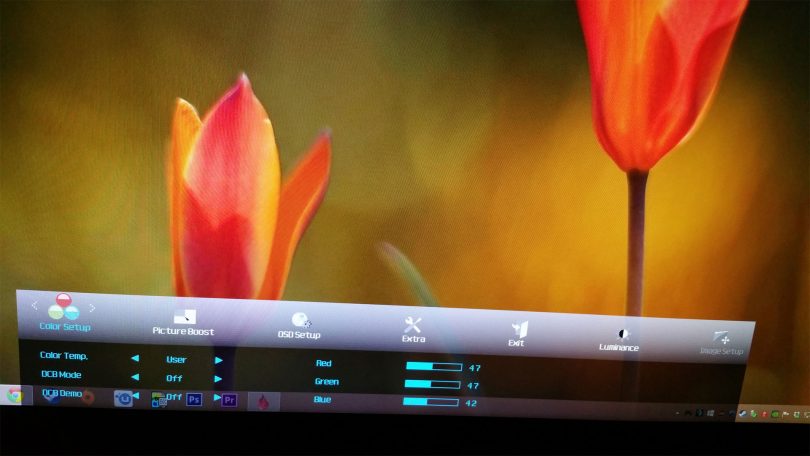 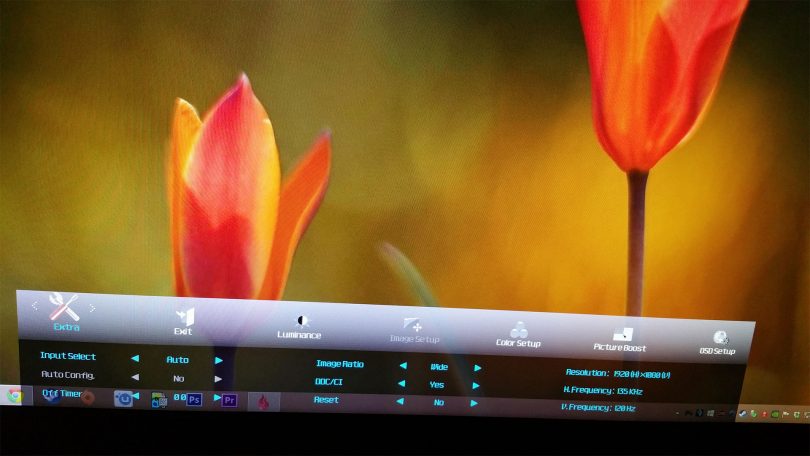 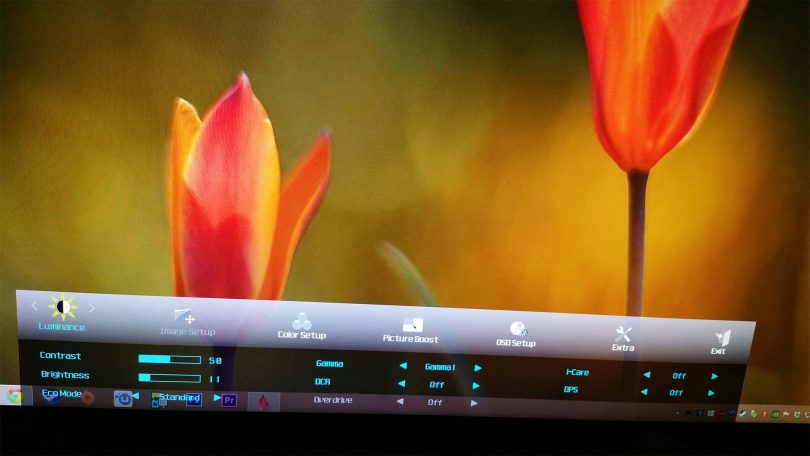 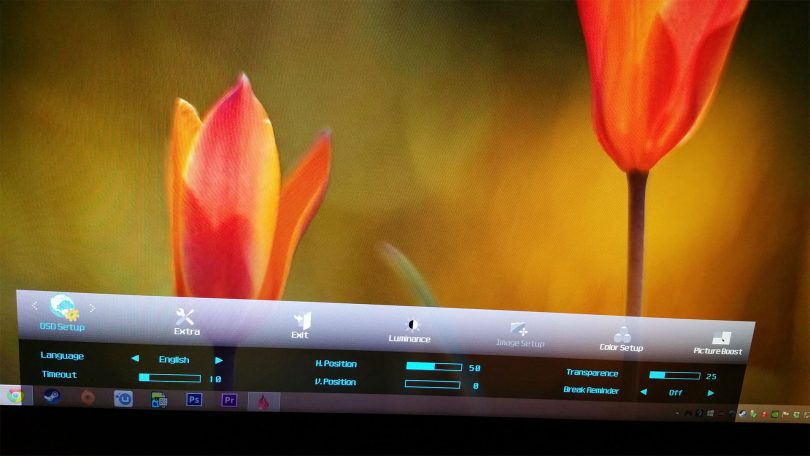 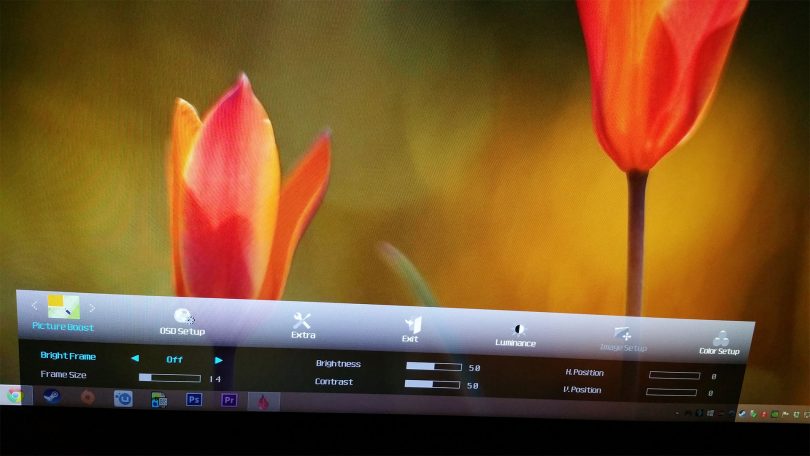 Being one of AOC’s gaming displays, we’re looking at a relatively standard TN panel incorporated into the G2460PQU. While primarily marketed towards hardcore PC gamers, the inclusion of several inputs begs the use of multiple sources. Before creating an ICC profile, I wanted to check how well the screen performed using only OSD calibrations. Brightness was calibrated to approximately 120 cd/m² for optimal darkroom usage. I managed to achieve a color temperature of 6441 K, very close to the 6500 K standard. In terms of white point, we’re looking at the largest deviations occuring on the corners of the screen, with the largest deviation occuring on the top left portion of the display. In terms of panel luminance, we see a 16% reduction of brightness on the top left corner. You can view the screen captures below to check overall panel uniformity of our G2460PQU review sample:

To achieve the best color accuracy, it is necessary to set the monitor’s color temperature to the “User” setting in order to unlock the RGB controls. Without the use of an ICC profile, I was able to calibrate the monitor using the stock “Gamma1” setting in order to achieve a gamma close to the 2.2 standard. Static contrast ratio after configuring OSD controls yielded an impressive 1066:1, along with a black level of 0.11 cd/m², which is quite good for a TN panel! The results after using OSD controls for color calibration can be seen in the chart below: 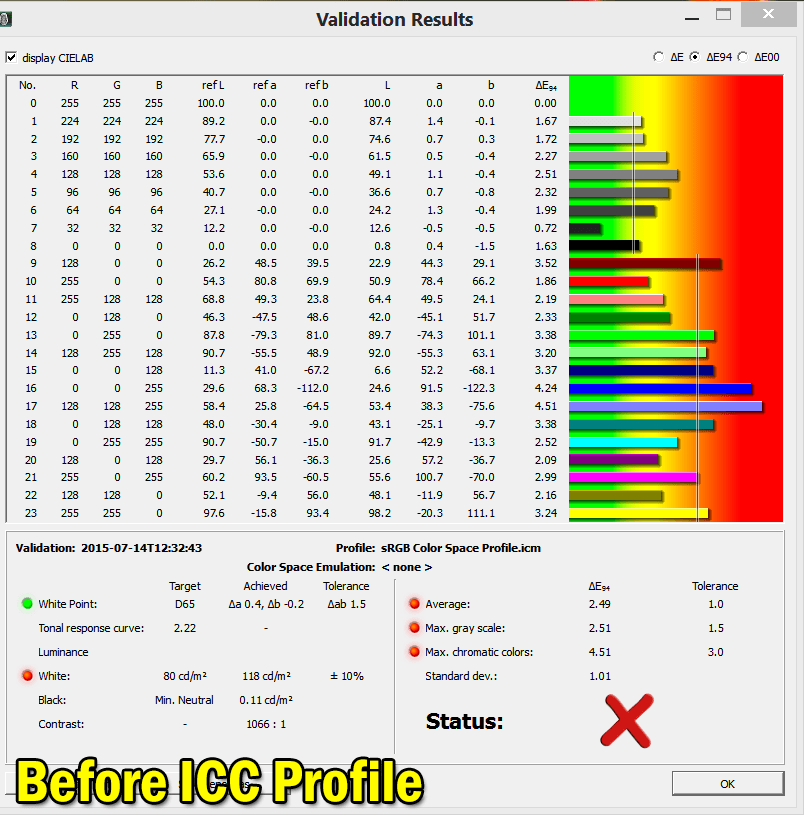 As you can see, there is still a lot of work to do before this monitor achieves optimal color accuracy. The customized OSD settings along with our ICC profile yielded the most out of this monitor. Contrast ratio was boosted slightly to 1078:1: 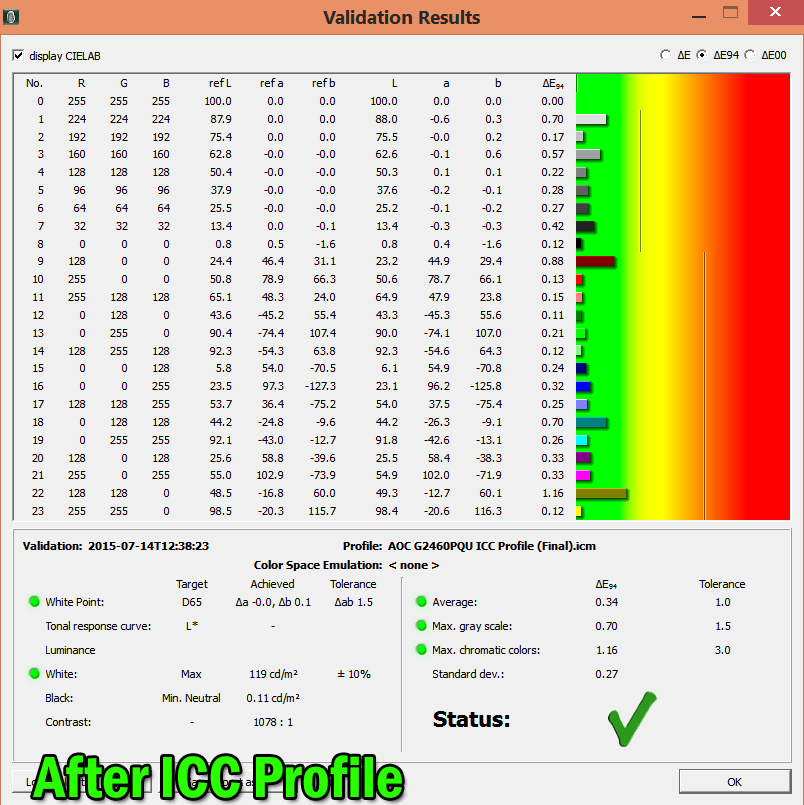 The image quality became much better once the ICC profile was applied. Keep in mind that traditional TN limitations still apply, including color/gamma shifts when viewed from different angles. It is important to maintain eye level with the monitor for an optimal viewing experience.

Note: These settings were achieved using an i1 Display Pro, along with X-Rite i1 Profiler and BasICColor software. The GPU used on this monitor was the NVIDIA GeForce 980 TI, using stock settings. These settings require an additional ICC profile for accuracy. Use these settings at your own discretion, as they may look different on your display.

The main purpose of purchasing a TN panel like the G2460PQU is to benefit from low latency gaming. Unfortunately, the G2460PQU disappoints with 60hz operation. While most TN gaming monitors hover around an average of 10ms input latency under 60hz, the G2460PQU has slightly more input lag under the same conditions. Connecting our dedicated lag testing device to the G2460PQU yielded the following measurements, using a 1080p/60hz signal:

Averaging out the measurements above yields an average input lag of 28ms. While the G2460PQU’s latency is low enough to be a non-issue to the majority of gamers, it’s higher than average for a budget TN panel. Keep in mind that this latency is for 60hz operation only. When utilizing 120hz or higher refresh rates, you can expect this number to cut in half.

To follow up on the latency tests above, I booted up my copy of Ultra Street Fighter IV to get an idea of how the additional latency actually feels in play. Using my BenQ RL2455HM gaming monitor as the preferred low latency display, there was a small difference between both monitors in terms of timing. As the game runs at a locked 60 frames per second, the difference I personally felt was approximately 1 frame of additional latency over the BenQ RL2455HM. Those looking to achieve the lowest input latency may not be satisfied with the 60hz operation of the G2460PQU. It is possible to reduce this latency by utilizing a higher refresh rate, such as 120hz. Unfortunately, our review sample wasn’t able to correctly display a 144hz refresh rate over DisplayPort connection, which resulted in an “Input Not Supported” message to appear on screen. This issue has reportedly been fixed in models produced during 2014 and newer. 144hz functions correctly when utilizing a dual-link DVI cable on our review sample.

Utilizing a higher refresh rate was as pleasant as you’d expect. The aforementioned latency was much harder to detect, and it’s unlikely that most users will have any issues when using this monitor for 120hz+ gaming. I tested out the 144hz refresh rate using dual-link DVI on Crysis 3; the game performed as smooth as ever. There are downsides, however, towards utilizing traditional V-Sync when compared to new technologies such as G-SYNC & FreeSync, including stuttering and increased input lag. 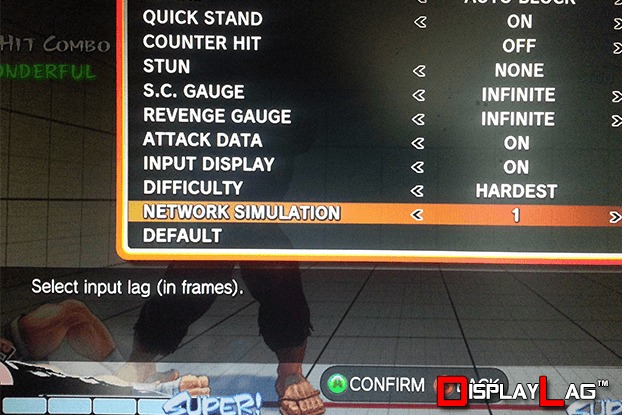 The AOC G2460PQU offers multiple overdrive settings in order to compensate for LCD motion blur. This is a key area where TN panels still have an advantage over higher end IPS and VA panels, as it’s not currently possible to get those panel types into 1ms GTG territory. The G2460PQU’s five overdrive presets include off, weak, light, medium, and strong settings. Using the ghosting test provided by TestUFO, utilizing any setting above ‘light’ will create noticeable artifacts that trail fast moving objects. You will want to avoid disabling overdrive entirely, as it will create a noticeable amount of blur that can be considered distracting. Most modern TN panels require some overdrive enabled in order to look their best. Overdrive configuration is only available at lower refresh rates, such as 60hz. When utilizing a 120hz refresh rate on our review sample, the overdrive setting was blanked out, unable to be changed. This was a non-issue however, as it passed the UFO test without any noticeable artifacts.