This BenQ XR3501 gaming monitor was provided by BenQ for review purposes. I will be reviewing the build construction, picture quality, and overall technical performance of the XR3501.

For years, most of the monitor market has been saturated with 16:9 displays, mainly due to modern media being designed to fit this aspect ratio. While 16:9 is significantly wider than the antiquated 4:3 aspect ratio, it’s quite common to see two or three monitors placed into modern setups to accommodate an even larger field of view. This isn’t perfect, as it still requires fiddling with multiple displays, and bezels between monitors can break the immersion, especially when it comes to gaming. Enter the newer 21:9 aspect ratio, which aims to replace a multi-monitor setup with a singular display. This aspect ratio is starting to see some serious support this year, with several top manufacturers on board for the ride. BenQ’s XR3501 not only offers a curved screen with a 35″ screen size, but also a 144hz refresh rate designed for fast-paced gaming. 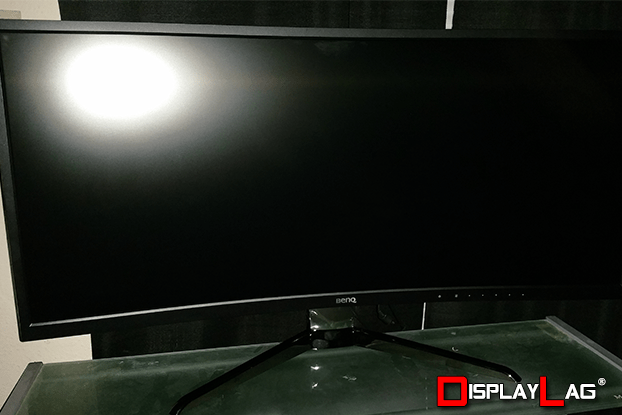 The BenQ XR3501 has a very solid build. The monitor has a decent amount of heft to it, mainly due to the extra-wide screen size. The stand is built accordingly to manage this weight, which exudes a shiny metallic finish, complimenting the monitor’s looks quite nicely. There is no height adjustment, though the monitor can be tilted to accommodate eye level. Curved screens tend to be a personal preference with modern 16:9 displays, however it feels just right with a 21:9 aspect ratio. It creates a sense of envelopment that is hard to replicate with 16:9 displays. 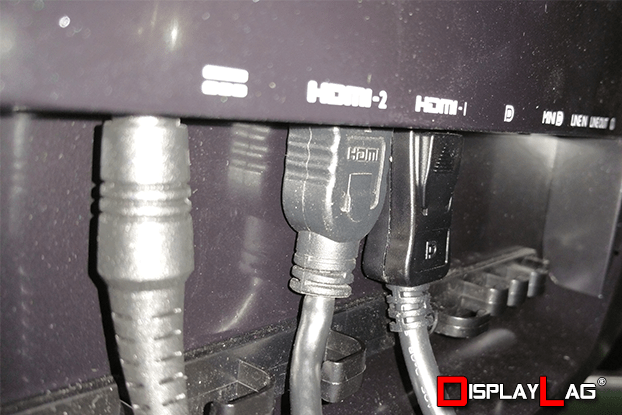 There isn’t a shortage of necessary inputs here, as the XR3501 features the latest in terms of input connectivity. Two HDMI 1.4 (not 2.0) ports are present to handle most of your mainstream devices, though you’ll omit these ports if you want to bring out the true potential of this monitor. DisplayPort and mini-DisplayPort connections are necessary in order to utilize the 144hz refresh rate, along with the 2560 x 1080 resolution. Finally, line in/out ports and a headphone jack handle your aural needs. The display itself is a VA panel with a 4ms GTG response time. While it can’t compete with TN monitors in terms of motion resolution, it makes up for it with noticeably better image quality.

The XR3501 may have the best buttons I’ve utilized in a display yet. The giant footprint of the 35″ screen allowed BenQ to implement large circular buttons that feel very responsive to the touch. True to traditional BenQ standards, they work well in dimly-lit environments as the buttons display their functions on the screen itself. BenQ also made a smart decision to illuminate the power button, so that you don’t get confused with the rest of the buttons on the monitor. It looks quite sleek in darker environments. 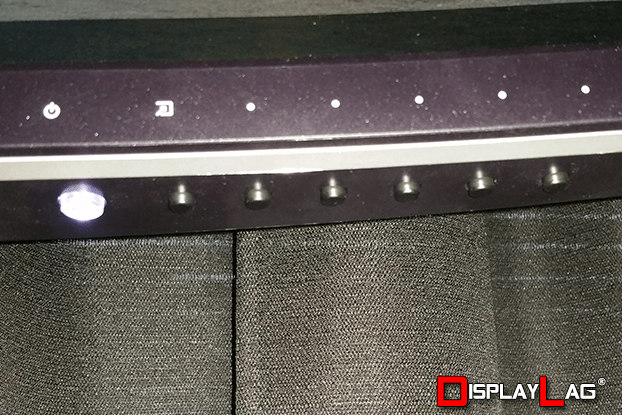 BenQ have steadily evolved their on-screen display over the years, tuning its responsiveness and overall presentation. The XR3501 takes a stylish departure from several of BenQ’s previous monitors with a modified color scheme. While the smart scaling features from their XL/RL line of monitors have been removed, the majority of important functions are still intact on the XR3501. Check the screenshots below to see all of the functions available on the XR3501. 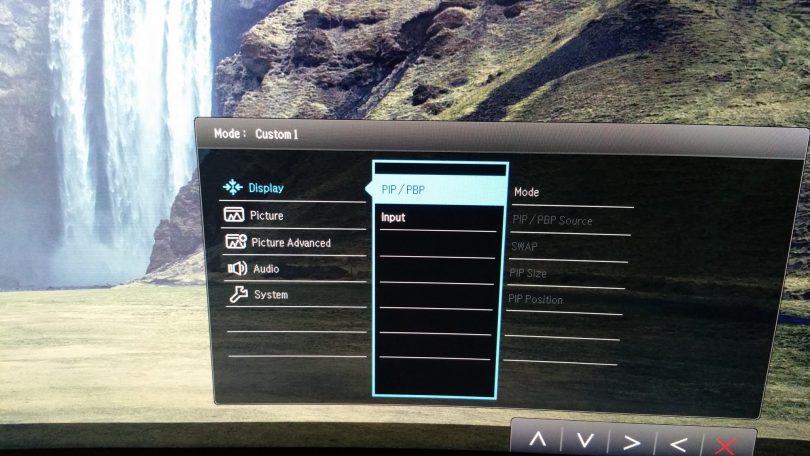 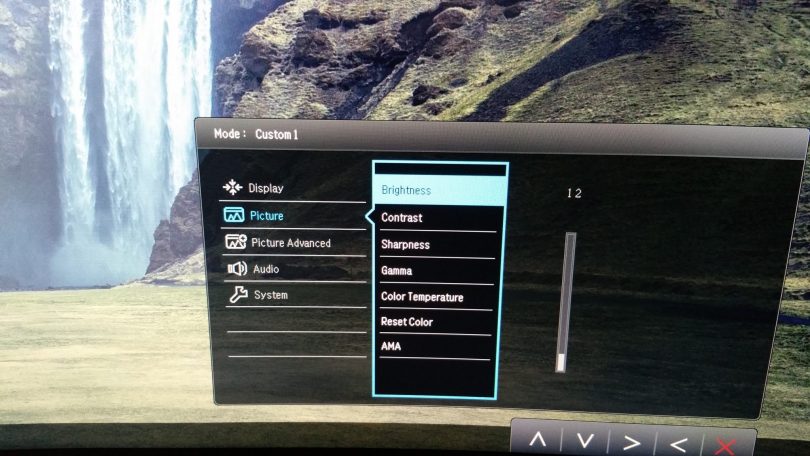 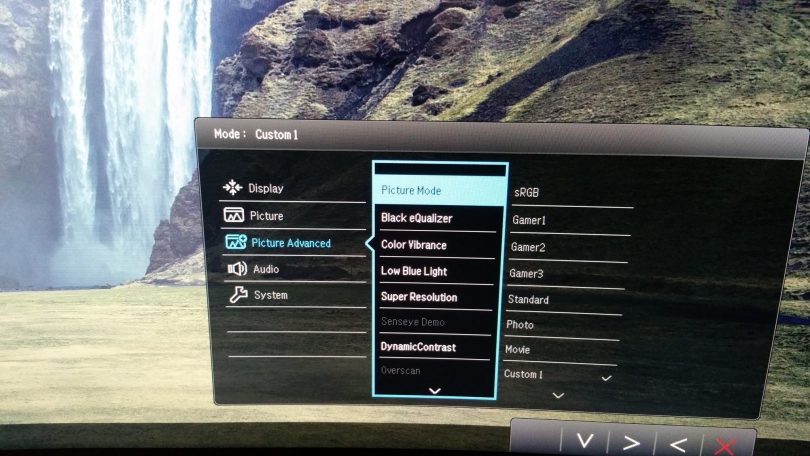 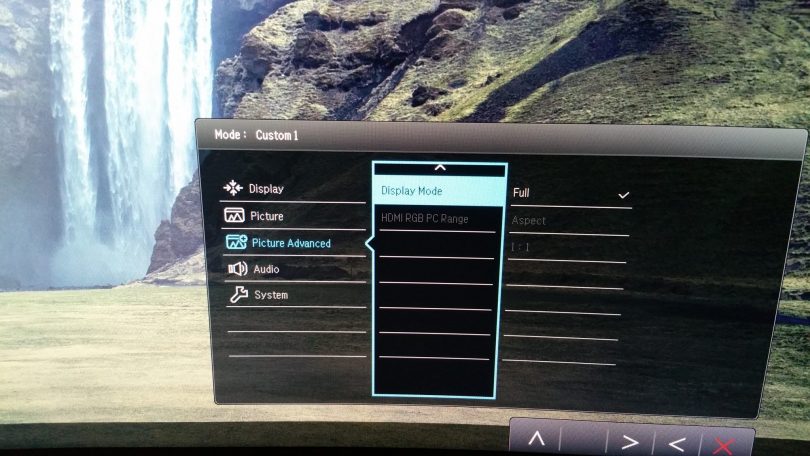 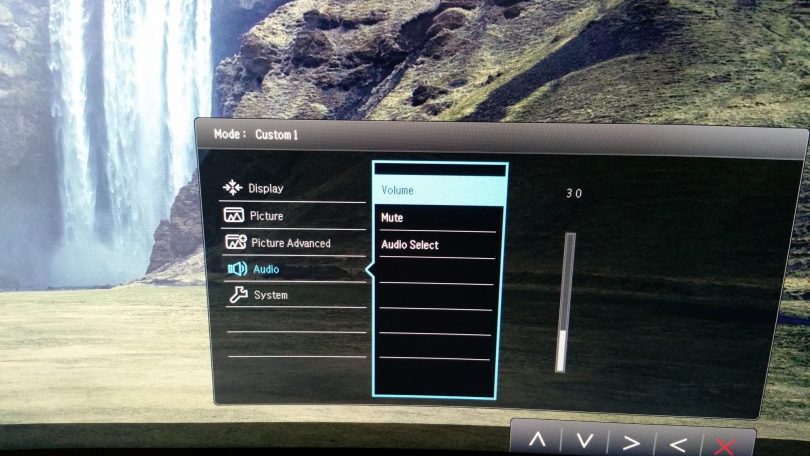 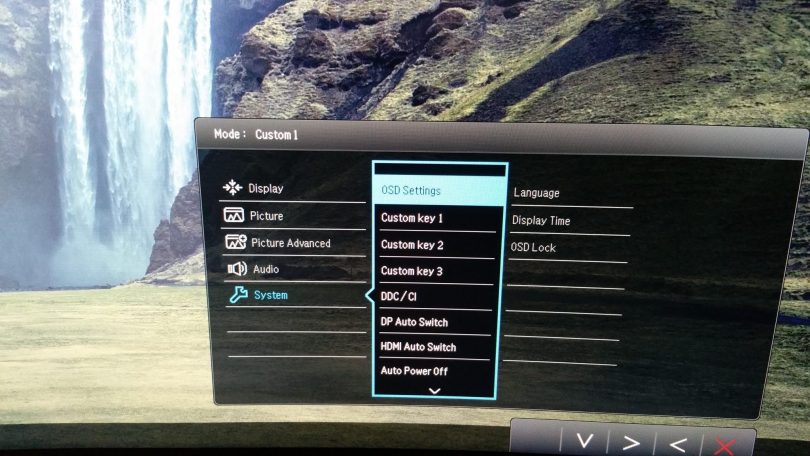 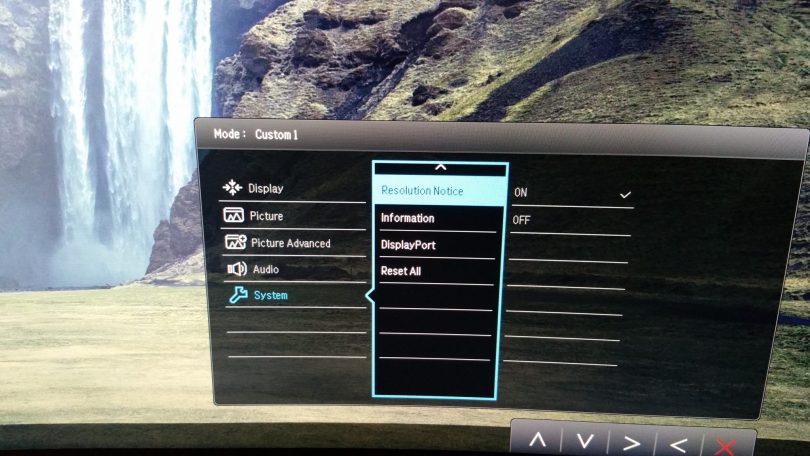 With modern LCD displays, a good portion of the image quality is dependent on panel uniformity. Having a large difference in luminance and white point across various portions of the screen can result in an uneven presentation. After calibrating the BenQ XR3501 to 120 cd/m² and a white point of 6500 K, I measured the variance between the center and corners of the display. The largest variance from the center luminance was a 17% reduction on the left side of the screen, with a recorded luminance of 97 cd/m². In terms of white point, the largest variance from the center was the bottom left corner, with a white point of 6712 K. Considering the fact that these screens are wider than traditional 16:9 displays, the panel uniformity is acceptable and shouldn’t cause too many concerns in daily usage.

The BenQ XR3501 utilizes a VA panel type, which is known to achieve excellent contrast ratios with very low black levels, when compared to other panel types such as IPS. Traditionally, most monitors require some configuration in their OSD to achieve 6500 K color temperature. Surprisingly, the XR3501 already achieves this color temperature without tweaking RGB values. Simply set the color temperature to ‘User’, which defaults to approximately 6517 K right away. Additionally, the brightness setting was modified in order to achieve 120 cd/m² luminance, which is an ideal brightness setting for dark room usage. Setting the brightness to ’12’ achieves a black level of 0.06 cd/m² and a contrast ratio of approximately 1991:1. This is almost spot on with BenQ’s own reported static contrast ratio of 2000:1. 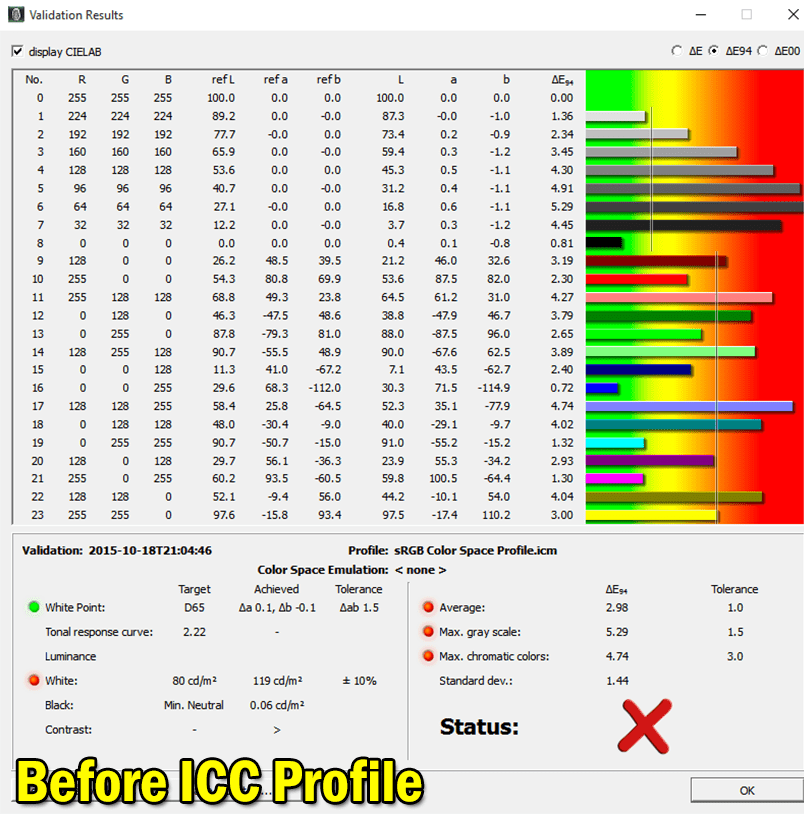 While the color temperature is ideal, an ICC profile must be applied to obtain optimal color and gamma balance from the XR3501. Once calibrated, the XR3501 offers a uniform picture. Due to the large screen size of the XR3501 however, pixel density is a bit lacking due to the 2560 x 1080 resolution. Utilizing a higher 3440 x 1440 resolution would solve this problem. Sadly, a tradeoff has to be made at this point in time, due to 3440 x 1440 panels lacking the ability to display 144hz refresh rates. Note: These settings were achieved using an i1 Display Pro, along with X-Rite i1 Profiler and BasICColor software. The GPU used on this monitor was the NVIDIA GeForce 980 TI, using stock settings. These settings require an additional ICC profile for accuracy. Use these settings at your own discretion, as they may look different on your display.

BenQ has created several monitors with low input latency in the past. While TN panels have typically offered the lowest amount of input latency, IPS and VA panels have started to achieve equally low input lag values within the last couple of years. The XR3501 manages to keep input lag quite low for serious gaming, and should definitely be considered when choosing a 21:9 gaming display. I measured the XR3501’s input latency using our 1080p/60hz lag testing device; the measurements are listed below:

Averaging out the above measurements results in an average input lag of 23ms, which is quite good for the majority of gamers. The XR3501 is capable of achieving even lower input lag than the numbers reported above, due to its 144hz refresh rate. Input lag reduces with higher refresh rates, so you can expect input lag to cut in half when using a refresh rate of 120hz+. If you’re only planning to use this monitor with higher than 60hz refresh rates, the input lag should be virtually undetectable with most games, making the XR3501 a formidable screen for gaming.

I booted up Ultra Street Fighter IV to get a feel for the input lag present within the XR3501 at 60hz. While switching back and forth between the XR3501 and BenQ RL2455HM gaming monitor, the difference felt to be approximately 1 frame, which is very good compared to most displays listed in our input lag database. With input lag being a non-issue at higher refresh rates, most users will be absolutely captivated with the large field of view the XR3501 provides, when compared to 16:9 displays. It’s essentially the same feeling most people received when transitioning from 4:3 boxed TVs into the current 16:9 widescreen format. The curvature of the screen envelops you into the experience, especially with open world games such as The Witcher 3: Wild Hunt. It’s hard to go back when you’re accustomed to the expanded field of view that 21:9 aspect ratio allows. Tread with caution, as lots of games don’t feature 21:9 support natively just yet. The big push has begun, and may take some time to become mainstream.

Outside of the slightly low resolution on the XR3501, the response time suffers a bit due to the VA panel type. The good news is, a lot of the blur can be reduced when using refresh rates above 60hz. I typically end up setting the AMA setting on most BenQ monitors to ‘High’, as it provides the best balance between overdrive and artifacts. However, the XR3501 doesn’t display artifacts as much as other BenQ monitors do, when using the ‘Premium’ setting. I think it’s a viable option for 60hz content, though I would stick to the ‘High’ setting when using 120hz or higher. I recorded 60 FPS videos comparing the ‘Off’, ‘High’, and ‘Premium’ settings on the XR3501 to illustrate the difference: