This BenQ RL2755HM gaming monitor was provided by BenQ for review purposes. I will be reviewing the build construction, picture quality, and overall technical performance of the RL2755HM.

The BenQ RL2455HM was my first formal monitor review on this website. Designed mainly as a monitor for console gamers, the monitor did exactly what it needed to: provide a low latency gaming experience at an affordable price. The RL2755HM continues the RL2455HM’s legacy, with a larger screen size and redesigned stand. Lets see how it holds up once we put it through its paces. 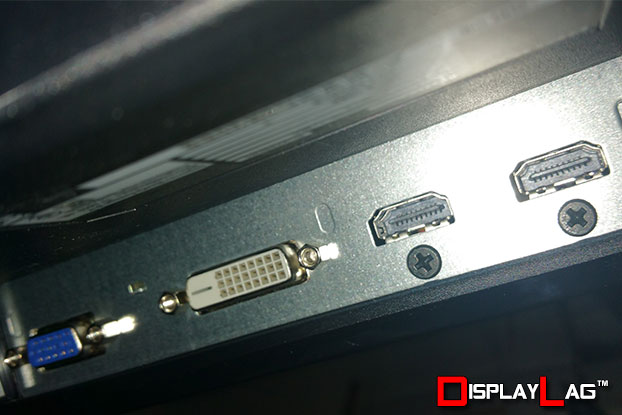 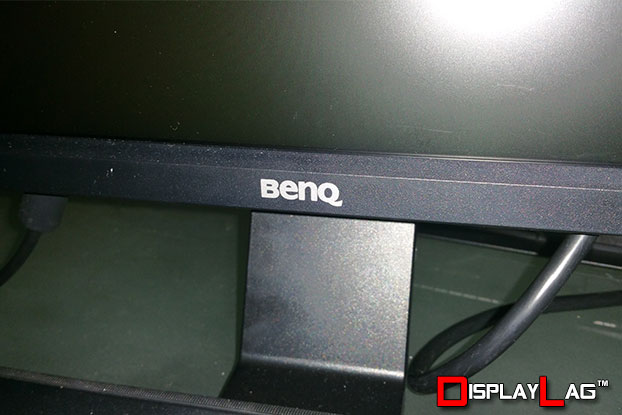 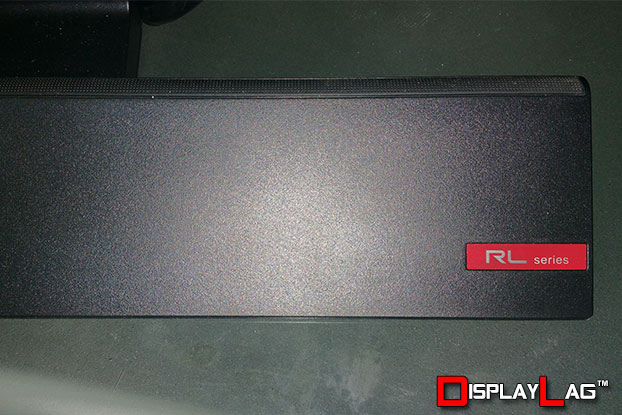 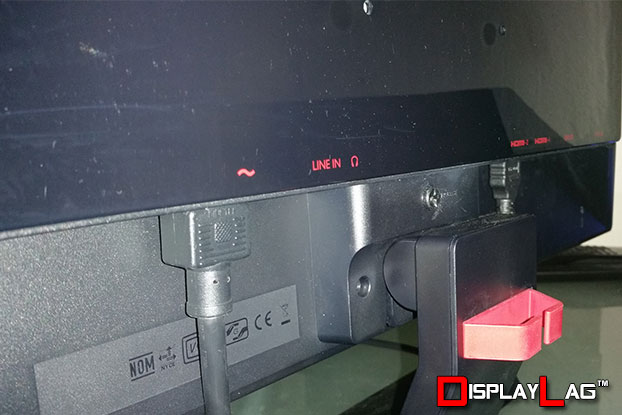 Input connectivity is similar to the previous RL2455HM, offering a single D-Sub, DVI, and two HDMI inputs. This should be more than enough for most gamers, although DisplayPort is absent. Considering this is a 1080p monitor, the higher bandwidth of DisplayPort is largely unnecessary. There are two 2W speakers provided for basic stereo sound, as well as headphone and line-in jacks for your audio equipment. The most noticeable improvement to the RL2755HM’s aesthetics is the brand new stand. It’s considerably wider and heftier than the flimsy one that was fitted onto the RL2455HM, and is a welcome change. The stand is capable of tilting vertically, however pivot, rotation, and height adjustment are not possible. It is therefore necessary to find an optimal position for the RL2755HM to maintain eye level with the center of the screen. A clip for cord management is attached behind the stand to route all of your cables neatly. The RL2755HM retains a matte-black aesthetic throughout the monitor, which allows the monitor to blend into almost any environment.

The BenQ RL2755HM features a 1920 x 1080 (1080p) native resolution, as well as a 60hz refresh rate. The panel used in the RL2755HM is an AUO M270HTNO TN panel, which is mainly designed to achieve the lowest response and latency timings. The response time is advertised to be 1ms GTG, a standard among most gaming monitors on the market. The 16:9 aspect ratio displays widescreen content without cropping or overscan. The native contrast ratio is stated to be 1000:1, with a dynamic contrast ratio of 20M:1. Finally, the panel is capable of producing 16.7 million colors, with a color gamut of 72% NTSC.

The BenQ RL2755HM features a classic set of physical buttons that have now become standard on most of BenQ’s monitors. They can be reassigned via the OSD to serve different functions, and are perfectly acceptable for night time usage, as the functions are displayed on the screen itself. I encountered absolutely no issues using the buttons on the RL2755HM; they provided a consistent experience. 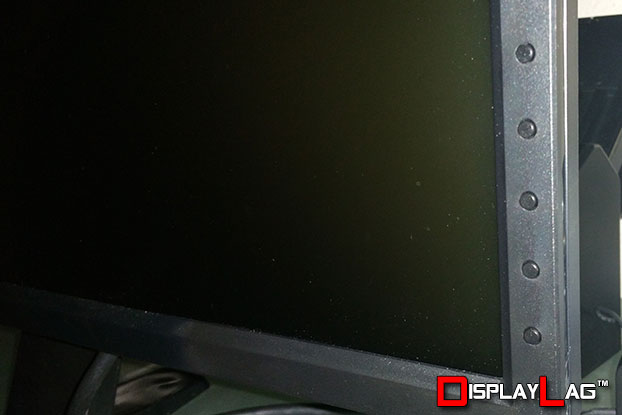 Not much has changed regarding the menu system within the RL2755HM. Pressing any of the buttons brings up a selection menu that accesses your custom keys, as well as the menu settings. The menu settings contain various options to configure your display. The “Picture” menu allows you to configure Brightness, Contrast, Sharpness, Color Vibrance, Black eQualizer, Low Blue Light, Gamma, Color Temperature, Hue, Instant Mode, and AMA. The “Picture Advanced” menu allows configuration of Picture Mode, Senseye, Dynamic Contrast, Overscan, Display Mode, Smart Scaling, Color Format, HDMI RGB PC Range, and Smart Focus. The “Audio” menu allows you to set the volume and mute functionality of the built-in speakers. Finally, the “System” menu allows you to configure OSD layout, set custom keys, change inputs, and acquire various information about the signal being sent to the monitor. 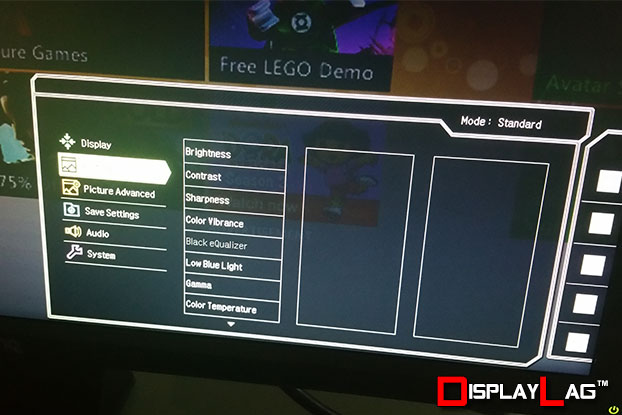 The BenQ RL2755HM houses a TN panel, which is best suited for low response times and input lag, however it can fall short when it comes to viewing angles and color reproduction. When compared to other TN panels however, the RL2755HM offers an overall great viewing experience. I calibrated the RL2755HM to a luminance of approximately 120 cd/m², which is a comfortable backlight level for darker rooms. The RL2755HM showed the highest deviance in backlight on the top left and right parts of the screen, with a maximum deviance of -17 cd/m² on each corner. In terms of white point, the largest deviance from the center of the screen is on the bottom left, with a color temperature rating of 6635 K, over the measured center white point of 6497 K. This difference is not noticeable to the eye, and overall, the RL2755HM keeps a rather uniform picture across the screen. It is important to note that the white point listed in this screenshots was achieved without the use of an ICC profile. The RL2755HM does a great job at achieving close to 6500 K color temperature without the use of one.

The BenQ RL2755HM has a host of picture modes to choose from, including: Standard, Movie, Photo, sRGB, Eco, FPS, Fighting, RTS 1, RTS 2, and three Gamer profiles for further customizations. Featuring several picture presets is a standard practice for most monitor companies, however the majority of them will feature various inaccuracies that will degrade the overall picture quality. I found that the “Standard” picture mode was the best one for the RL2755HM, as it allowed enough customization to tweak to my liking. I was also able to calibrate this picture mode to achieve 6500 K color temperature. The brightness setting was reduced to 27 in order to achieve close to 120 cd/m² for dimly-lit environments. The contrast setting required no adjustment, and was left at its default value of 50, and I was able to discern all squares on the black level and contrast tests featured on Lagom’s calibration site. 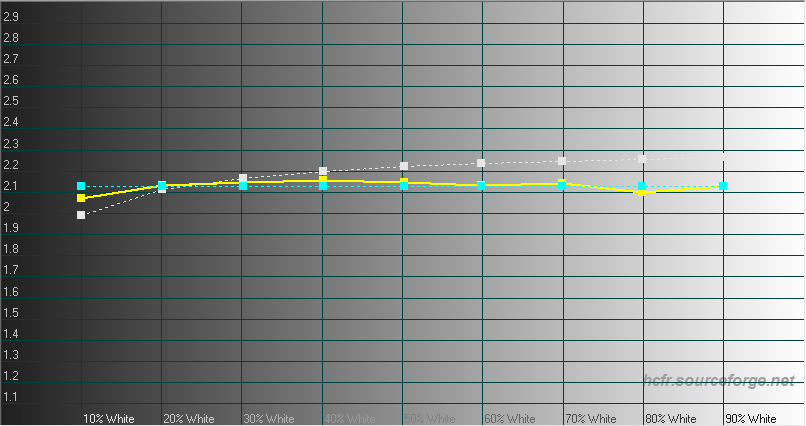 Once properly calibrated, the BenQ RL2755HM looks excellent for a TN panel. The default gamma value of the RL2755HM using the “Gamma 3″ setting (without ICC profile, pictured above) is approximately 2.13, which is very close to the 2.2 gamma standard used by mainstream media. The adjustments made by the ICC profile result in an average gamma of 2.48, which is more preferable for general monitor usage. Using the ICC profile below, I was able to achieve a very low black level of 0.11 cd/m², as well as a contrast ratio of 1100:1! This actually exceeds BenQ’s advertised contrast ratio, which was 1000:1. As long as you maintain proper eye level with the monitor, the RL2755HM offers a very enjoyable picture for a 27” TN monitor.

Note: These settings were achieved using an i1 Display Pro, along with X-Rite i1 Profiler and BasICColor software. The GPUs used on the test computer are Nvidia GTX 970s running in SLI configuration, using stock settings. These settings require an additional ICC profile for accuracy. Use these settings at your own discretion, as they may look different on your display. The BenQ RL2755HM offers all of BenQ’s signature scaling options made famous in their RL and XL monitor lines. Not only can you select from Full, Aspect, and 1:1 scaling, but you are also able to emulate various screen sizes, simulating 17″-24″ screen sizes, as well as a variety of aspect ratios such as 4:3 and 16:10. For most users, engaging the screen size emulation will be largely unnecessary, but it’s a good implementation by BenQ regardless, for those that are picky about their scaling options.

BenQ’s RL and XL gaming monitors have been known for their very fast input lag ratings, allowing the quickest input response possible from a LCD-based display. The previous RL2455HM fared excellent in this regard, offering an average 10ms input lag, which made it a formidable gaming display. The only downside to that monitor was its screen size, requiring you to sit rather close to fully enjoy it. The RL2755HM tackles this with its significantly larger screen size. But does it offer the same low input lag ratings as other BenQ monitors? Yes, it does.

Using a 1080p/60hz testing signal, I tested the RL2755HM to measure the amount of input lag present in the display. Input lag numbers didn’t change at all when utilizing different picture modes, and also did not change by changing the “Instant Mode” setting. Typically, this setting can reduce input lag, though I’ve found it to make no difference in some of BenQ’s models. The RL2755HM is one of those models that don’t require “Instant Mode” to achieve the lowest possible input lag. The input lag measured on the BenQ RL2755HM is as follows:

As expected, the BenQ RL2755HM continues to offer low latency similar to previous RL and XL monitors. The average input lag of the BenQ RL2755HM is approximately 10ms. This is fast enough to serve any gaming activity, including competitive gaming at the highest level.

To further test out the gaming performance of the BenQ RL2755HM, I booted up my copy of Ultra Street Fighter IV, my preferred latency testing benchmark. I switched back and forth between the older RL2455HM and the RL2755HM, and couldn’t detect any difference in terms of input response. I was able to perform the hardest combo links, and my timings felt identical across both monitors. The use of a TN panel also helped in keeping motion blur to a minimum, thanks to the 1ms GTG response time featured on the RL2755HM. Once set to calibrated settings, it was a joy to play on the RL2755HM.

The use of a TN panel allows the RL2755HM to achieve very fast response times, which consequently reduces the appearance of blur trailing moving objects. The majority of BenQ’s monitors I’ve come across benefited by keeping the AMA setting set to “High”. The RL2755HM is no different in this regard. Setting the AMA to “OFF” results in noticeable motion blur that is quite distracting. The default setting of “High” removes most blurring and does a good job at maintaining a balanced picture. Setting the AMA to “Premium” results in the most overdrive to remove blur, however it creates very noticeable artifacts that degrade picture quality. I’d recommend staying away from “Premium” unless you really need the extra clarity, as it comes with a noticeable cost. The videos below showcase the differences between all three AMA modes.

Testing samples courtesy of TestUFO
AMA set to OFF: