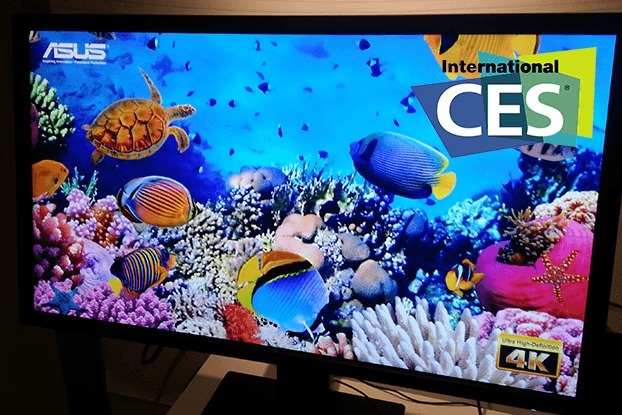 Some attendees at CES 2014 may have noticed that ASUS wasn’t present at the actual convention center, but instead were tucked away in a separate hotel on the Vegas strip. After working my way to find out where they were hidden, I was excited to be given the opportunity to see what they had in store for this year. ASUS displays generally excite me, as they typically offer something for every type of consumer. Whether you’re a hardcore gamer, a graphic designer, or merely need a new 23-inch monitor for your living room computer, ASUS will usually have something interesting to offer. Not to mention, several ASUS displays received excellent ratings in our input lag database for gaming, including their top performing MX279H IPS display. So what did I discover at their exhibit? Read on to find out. 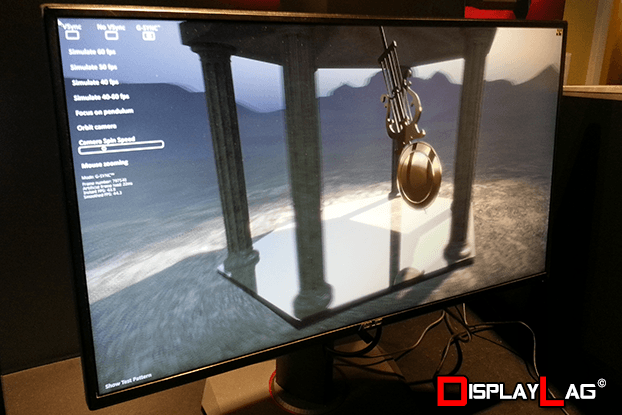 This new monitor from ASUS is striking. Complete with the ASUS ROG (Republic of Gamers) branding, this monitor was designed for gaming enthusiasts that value fast response times and low input lag. Aesthetically speaking, the monitor is built very well. It features a fully adjustable stand with a solid base, and a narrow bezel to keep the overall look relatively sleek. On a technical note, ASUS is proud to trumpet the fact that it’s the world’s first WQHD (2560 x 1440) G-Sync monitor. This should please gamers that have had their fill with 1080p, and crave a higher resolution without having to jump to 4K. The benefits of G-Sync shouldn’t be understated, as they help fix the current issues surrounding V-Sync. Having a monitor that communicates directly to a capable Nvidia GPU provides many benefits for gamers, including decreased input lag, no screen tearing, better motion resolution, and stutter-free gameplay. I wrote my impressions with G-Sync in my BenQ roundup posted earlier, and my positive impressions with the technology carry over to the ROG PG278Q, albeit in a higher resolution. 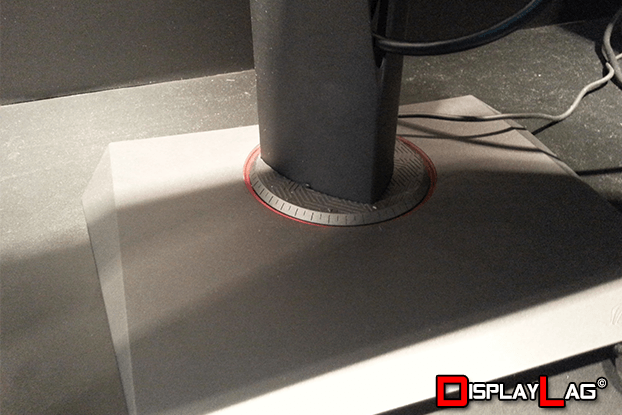 The ROG PG278Q’s base is very sturdy.

Being a monitor endorsed by ASUS’ Republic of Gamers branding, my first question was simple: does it lag? The ASUS representative assured me that the monitor was designed with gaming enthusiasts in mind, and the spec sheet reflects this statement. The PG278Q features a refresh rate higher than 120hz (an exact figure wasn’t specificed, but I would naturally assume around 144hz), as well as 1ms GTG response time (not to be confused with input lag). Upon questioning the responsiveness of this monitor, the ASUS rep mentioned that this monitor bypasses the framebuffer entirely, resulting in one less process that causes input lag. The PG278Q also features an 8-bit TN panel, specifically designed to cater to this monitor’s feature set. It is important to note that not all TN panels are designed in the same manner, and ASUS intends to use the highest quality TN panel for this monitor. You can fully expect this monitor to handle most frame-intensive gaming. Of course, the PG278Q will also fully support Nvidia’s 3D Vision. The ASUS ROG Swift PG278Q is currently scheduled to be released around the beginning of Q2, and will be priced at $799. 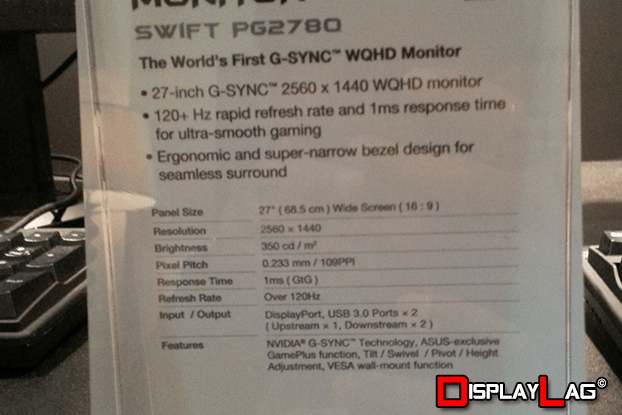 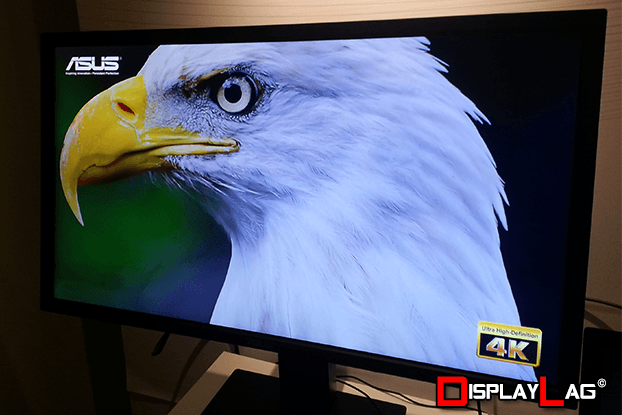 The ASUS PB287Q is ASUS’ second entry in 4K monitors, coming in at 28-inches of real estate.

The other new monitor that ASUS was very proud of showing was their second foray into the 4K resolution race, the PB287Q. I had actually heard about this monitor before I even got my feet used to walking around the convention halls, so I was eager to check it out as soon as I got the chance. ASUS previously launched the PQ321Q 4K monitor, though its price point wasn’t very friendly to the average enthusiast. The PB287Q features a TN panel operating at 60hz, so gamers that clamor for high frame rates need not apply. The ASUS rep mentioned that while it is a TN panel, they understand that people investing in a 4K monitor strive to have excellent picture quality. In terms of image quality, ASUS is aiming to deliver a TN panel that is very comparable to an e-IPS display. Upon viewing the PB287Q, the first word to come to mind was sharp. I personally feel that the real benefits of 4K is seen up close, which are ideal ranges for monitor use. While I would personally love to see 4K delivered in a true IPS panel, it would ultimately drive the price above the target demographic of this monitor. As it stands, the picture quality for a TN panel was impressive, offering vivid colors and contrast. 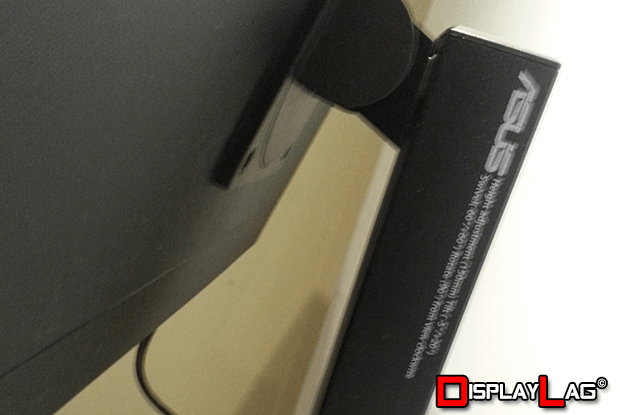 Speaking of gaming, I wasn’t able to get an idea of how much this monitor will lag, if at all once it debuts. With manufacturers throwing 4K displays at every corner, we still haven’t acquired enough 4K content to really push the capabilities of these displays. I am certain that a portion of the market will purchase 4K displays as a form of future proofing, so being able to scale 1080p content to 4K will be an important selling point for these displays presently. The ASUS rep assured me that they’re still optimizing their scaling methods for 1080p content, and plan to offer their best performance in this regard. For those curious, the PB287Q will fully support 1920 x 1080 (1080p) and 2560 x 1440 (WQHD) resolutions at 60hz. 4K content is capped to 30hz via HDMI, due to the limitations surrounding HDMI 1.4. Native 4K content will only operate at 60hz when using DisplayPort on this monitor. The PB287Q features a 1ms GTG response time, which is very good considering that most TN monitors on the market are around 2ms. In terms of connectivity, it sports DisplayPort and HDMI/MHL ports, and also features integrated speakers. You can expect the ASUS PB287Q 4K monitor in Q2, targetting a $799 price point.

This concludes my tour of ASUS’ display offerings from CES 2014! Please stay tuned for more CES 2014 coverage arriving very soon. Don’t forget to check out our input lag database, with nearly 300 displays tested for input lag, as well as the rest of our CES 2014 coverage below: