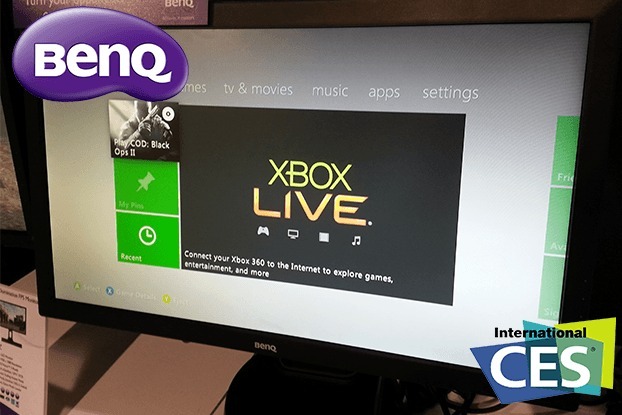 BenQ was one of my first stops at CES 2014. Being a competitive gamer, I was excited to see what BenQ were offering this year, as they are one of the few brands that actually cater to competitive gamers. Last year, I wrote a full review on the BenQ RL2455HM monitor, which is actively used for our Lag Factor reviews, and serves as an excellent display for those that value low input lag. With hype centering around exciting new technologies such as Nvidia’s G-Sync, I was curious to see if BenQ was offering any displays to compliment such advancements. I wasn’t disappointed. 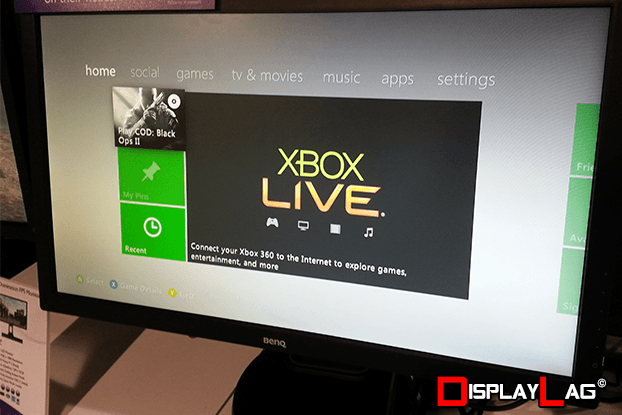 The BenQ RL2460HT features a dedicated HDMI-out port, perfect for gamers that wish to stream and edit content.

First, I would like to talk about one of their new monitors that will definitely stir some excitement across several gaming communities. The BenQ RL2460HT is a monitor that is very similar to the aforementioned RL2455HM. It sports a 24-inch display, 1ms response time, a plethora of inputs (2 HDMI, 1 DVI, 1 VGA), a TN-panel, and integrated speakers. Standard stuff that’s available among most monitors today, with one key exception. This monitor features an HDMI-out port, preventing the need for an HDMI splitter! This allows you to clone an HDMI input that is being fed to the RL2460HT to any monitor of your choosing, without having to suffer any input delays in the process (I mean it). This utilizes a dedicated HDMI-out that is built directly into the monitor.

Naturally, when a company touts a lag-free experience, my first instinct is skepticism. After all, if lag wasn’t an issue, this website wouldn’t exist! So you can imagine my excitement when I discovered that professional gaming team Evil Geniuses was sending out one of the very best fighting game players, Justin Wong, to promote this monitor. As CES 2014 was mostly a trade/business show for electronics, the amount of actual gamers in the building were slim, which allowed me to get a large amount of play time with Justin to see if the monitor lived up to the hype. 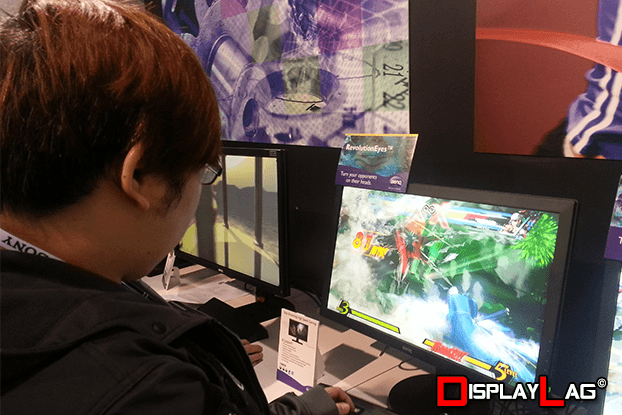 Evil Geniuses sent out professional fighting game player Justin Wong to show off what the RL2460HT was about. Armed with a copy of Ultimate Marvel vs. Capcom 3, Justin was taking on all challengers.

The RL2460HT did not disappoint in any respect. While Justin was utilizing the RL2460HT as his primary display, my attention was focused on the RL2455HM that was being fed the signal from the RL2460HT’s HDMI-out port. We played each other for about an hour straight in Ultimate Marvel vs. Capcom 3. All of my inputs registered cleanly and responsively, without any noticeable delay between the RL2460HT and the RL2455HM. It was great to know that the screen wasn’t holding me back; at least I found solace in that fact after being unable to take a single game from Justin regardless. The monitor also features a “Fighting” display mode, which optimizes the picture for fighting games based on input from players like Justin. It shouldn’t have any affect on the actual processing of the screen, so like the RL2455HM, you can use any image preset you like without worrying about additional lag. The dedicated HDMI-out port is definitely a feature that will see much use, whether you want to use it to feed into a stream station, or serve as a clone display for a head-to-head station. The RL2460HT will be retailing for $249 when it launches in Q1 of this year. 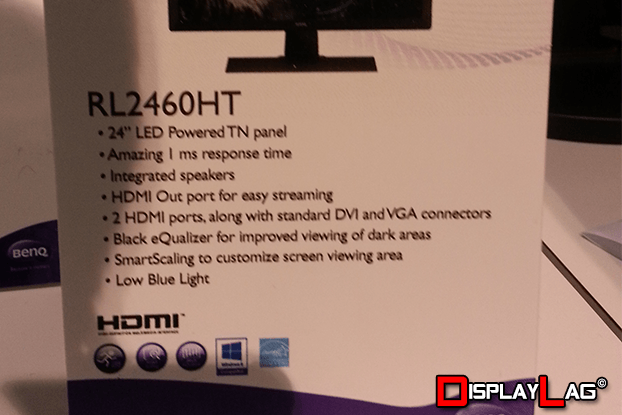 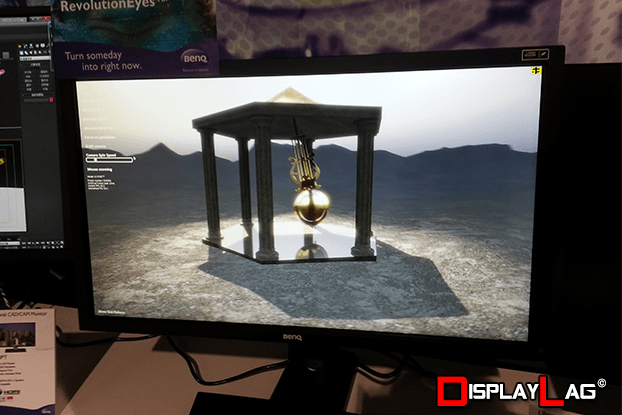 The BenQ XL2720G is their G-Sync capable monitor, complete with 1080p resolution, 144hz refresh rate, and the standard features you find in most BenQ monitors.

Since I first heard of Nvidia’s G-Sync technology, I’ve been eagerly awaiting the day I get to finally see it in action, and the BenQ XL2720G was my first introduction to this wonderful new advancement in PC gaming. For those that are unaware, G-Sync aims to obliterate the current problems with PC gaming, largely stemming from the use of V-Sync. By enabling V-Sync, gamers get a smooth, tear-free picture, however V-Sync causes additional input lag which can detract from the enjoyment of the game. It also becomes a hungry resource for the GPU, and any drop in frames results in a drastic reduction of displayed frame rate. If a game running at 60 FPS encounters a minor hiccup, the frame rate of the game can drop as low as 30 FPS! This is remedied by disabling V-Sync, but that causes its own problems. A game with V-Sync disabled will show large amounts of screen tearing, which also affects the game play experience. G-Sync solves all of this, becoming a direct bridge between an Nvidia GPU and a display with the G-Sync module installed. The benefits include drastically reduced input lag, no screen tearing, and smooth transitions of frames at multiple frame rates. Once you see it in person, it’s hard to imagine settling for anything else. 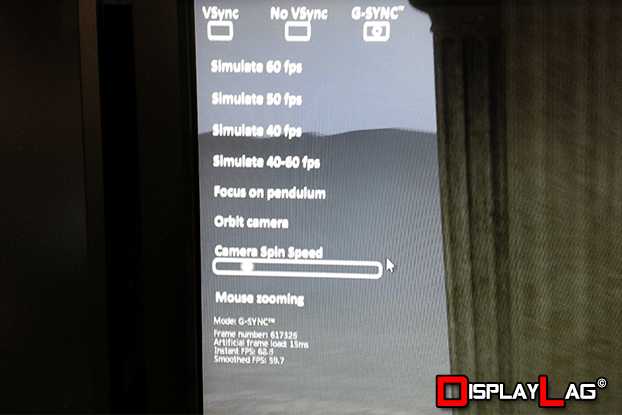 The G-Sync menu allowed me to switch between varying frame rates, including 40, 50, and 60 frames per second. It also allowed me to compare the differences between V-Sync, no V-Sync, and G-Sync. As you can see in the picture above, I was also able to control the spin speed of the camera, to see how well the monitor held up to fast motion. In every single instance, G-Sync showed clear superiority over the alternatives. Camera pans were smooth and stutter-free, there was no screen tearing, and motion blur was reduced due to the synchronization of the panel and GPU. I wish the benefits were able to be captured accurately on a cell phone camera, but alas, you’re going to have to take my word on it. Very rarely do we encounter advancements in technology that do not impose a drawback over time. Nvidia’s G-Sync technology is one of those rare times where I cannot think of any drawbacks. It is an exciting time to be a PC gamer. Expect the XL2720G in Q1 of this year. 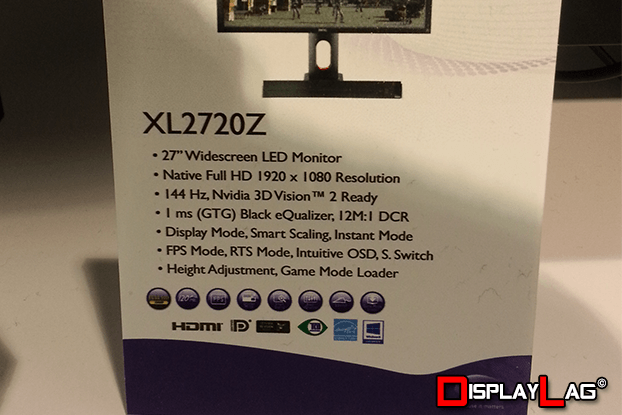 The BenQ XL2720G will feature the same specs as the XL2720Z, with an added Nvidia G-Sync module. 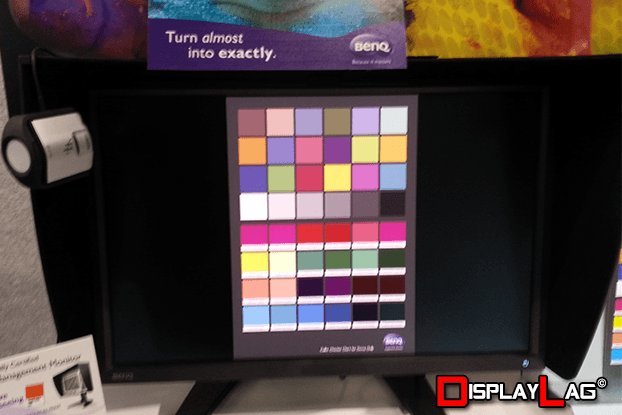 During my time at the BenQ booth, one monitor in particular caught my attention, and ironically, it didn’t have anything but a color grid visible on it. Not only that, but it had a black hood planted onto the monitor itself, preventing ambient light from leaking onto the screen. What initially looked like a piece of paper stuck to the screen, to my surprise, was the screen itself displaying how accurate its color reproduction was. The PG2401PT is one of BenQ’s premium offerings, with a native 10-bit IPS panel, 5ms GTG response time (12ms BTW), 1920 x 1200 resolution at a 16:10 aspect ratio, and all of the certifications you would need to justify this monitor for serious professional applications. It also features embedded USB ports.

Why am I posting this monitor when most of us are gamers? Because I feel that there are some of us gamers that actually value the color reproduction capabilities of a monitor such as this. If you have visited our input lag database, you may have noticed that I have already tested several graphic design monitors for their input lag rating. While some of them are adequate for gaming, most of them do not offer the ultra-low input lag ratings that their lower end TN counterparts offer with relative ease. The fastest monitor in my database, the ASUS MX279H, isn’t even designed as a gaming monitor, yet offers the benefits of IPS technology along with low input lag. There’s no telling how fast the PG2401PT performs in gaming applications, as I wasn’t able to test it on site, but I would imagine that anyone willing to pay its price tag would be interested in using it for all applications. The BenQ PG2401PT is currently available for $999. 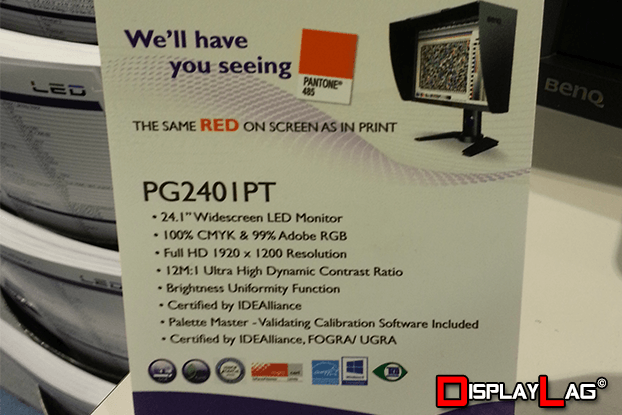 The spec sheet for the BenQ PG2401PT monitor.

This wraps up my experience at BenQ’s booth during CES 2014! As you can see, there are definitely some exciting displays coming in the near future, regardless of your intentions. Don’t forget to check out more CES coverage using the links below, as well as our input lag database with nearly 300 displays tested!