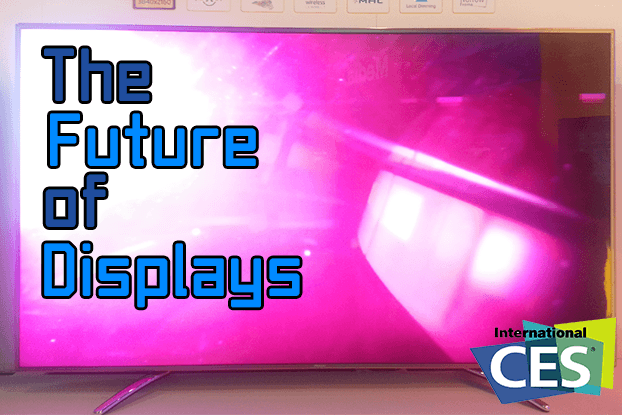 As some of you may know via our Twitter and Facebook pages, I spent the entirety of last week at CES 2014 held in Las Vegas, Nevada. This event is held every year, and showcases the latest and greatest advances in technology worldwide. Among the technology showcased was the next generation in displays, featuring almost every display brand you can think of. From the 147-inch Life Space UX projector from Sony, to the 28-inch 4K monitor from ASUS, there was something for everyone on display. Being a one man army, it was difficult to grab everything available on the show floor, so unfortunately, I wasn’t able to cover every manufacturer on display. Needless to say, I walked away impressed this year, and even more excited to see how the future will unfold.

I will be writing separate articles for the manufacturers that gave me a good chunk of their time to cover their upcoming displays. You can use the table of contents above for an in-depth look at some of these manufacturers. For a general look at Hisense and Toshiba, you can keep on reading.

Hisense isn’t quite as popular as some of the powerhouse brands today, but I was still impressed with what they had on display. They had one of the more impressive show floors out of all the Chinese display exhibitors that were present at CES 2014, with a wide array of OLED, curved, 4K, and other displays. Almost every manufacturer seemed to have these key areas locked down in abundance, so as a consumer, you can expect to be completely bombarded with 4K and curved HDTVs in the near future. The real draw for me here was the OLED displays, which a lot of manufacturers had on floor to display. 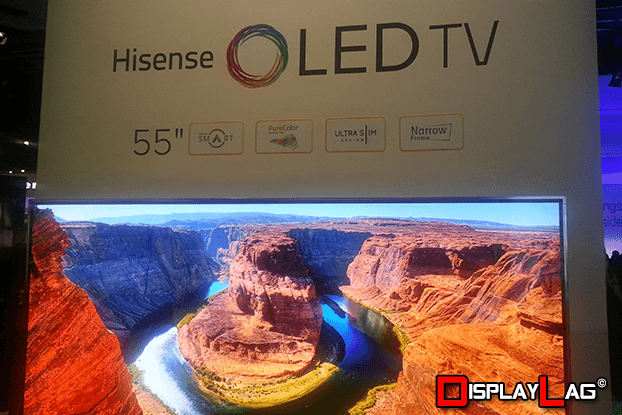 While most consider OLED the future in terms of display technology, Hisense didn’t give me a release date on their line of OLED HDTVs. The pictures don’t do it justice.

Hisense, like every other manufacturer on the floor, had an assortment of curved HDTVs to show to the attendees. These displays are meant to provide a more immersive experience to the user, akin to an IMAX or theater screen. It was hard for me to truly appreciate the benefits of such a display on the crowded CES floors, but they were enticing enough for me to capture. 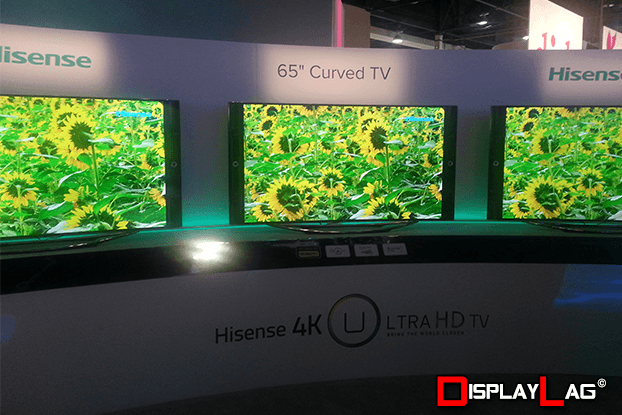 Curved HDTVs were an absolute force at CES 2014, and Hisense wasn’t an exception.

Of course, Hisense also had a multitude of 4K displays to show, and it’s very clear that 4K will be a force to be reckoned with. Offering four times the resolution of 1080p, it’s a no brainer (on paper) to consider the alternative. However, the reality is that 4K content still needs time to really develop, and with the next generation consoles offering a limited 1080p output in gaming, it will be a while before the mass market can truly take advantage of this resolution. But hey, maybe you’re one of those people with a high-end media/gaming PC, able to tackle what 4K has to offer without much hassle. The real benefits to 4K are seen up close, allowing graphic-gurus to appreciate the fine pixel detail at ranges that weren’t possible with 1080p. 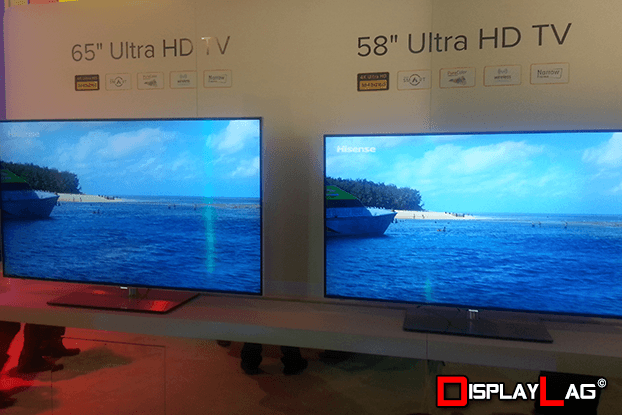 A sample of 4K offerings from Hisense. CES 2014 was filled with 4K panels at almost every corner.

As much as I would have loved to talk with the higher ups at Hisense, such as their display engineers, I wasn’t able to track them down for some real discussion. It would have been lovely to discuss some of these displays with them.

There were two things that stuck out to me at Toshiba’s booth. One of them is their 5K HDTV, which is currently in a prototype stage. The main allure of this display is its 21:9 aspect ratio. The 21:9 display market is one that is getting more traction as time goes by, and while it solves a problem with black bars, it doesn’t really do much for any other type of content. It offers more pixels on each side of a 4K Ultra HD display to accomplish this, giving a wider aspect ratio than the typical 16:9. Doesn’t really offer any real gaming purpose, but it’s cool to see regardless. 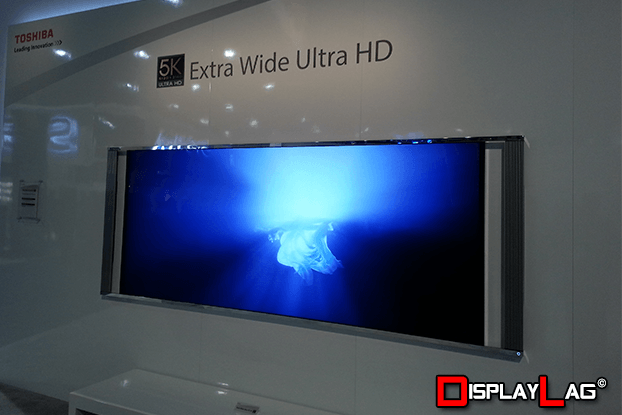 Toshiba’s 5K UHD display, which adds additional pixels on each end of the screen to accomplish a wider aspect ratio.

The other was more pertinent to gamers, being Toshiba’s cloud gaming initiative. Toshiba partnered up with GameNow, a company that aims to offer cloud gaming directly to a variety of devices. At CES 2014, the title offered for demonstration purposes was none other than Street Fighter X Tekken, complete with third party controllers. Being a huge fighting game fan myself, I was excited to see this title being used to show off the service. 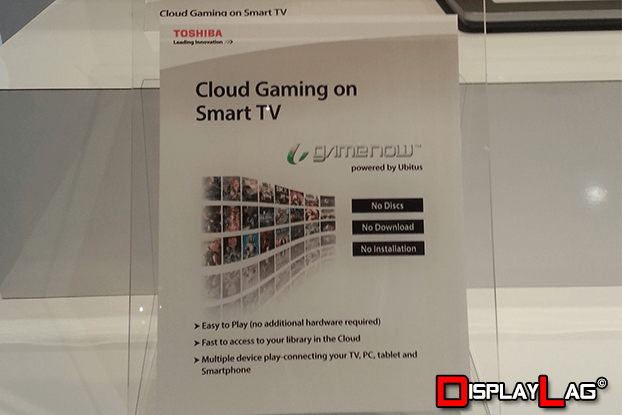 Toshiba partnered with GameNow to provide several game titles over a cloud network, straight to your HDTV.

I really wish I could report positively on GameNow. I think that cloud gaming is an excellent way to bring new gamers into the industry, as it gets rid of the biggest barrier of entry: the video game console. With that said, I’m not thrilled about playing a video game in a manner that wasn’t intended by the developer. I think using a fighting game for demonstration was a poor choice on Toshiba’s part, as it really exemplifies the flaws with cloud gaming. During my time with the demo, it was extremely frustrating trying to execute anything worthwhile. Forget about linking critical combos, as all forms of critical timing are thrown out the window. On top of the massive input lag that I experienced (very similar to a red bar connection in Street Fighter IV), the service also had constant issues with de-syncing during gameplay. During my first match, the connection was so bad to the point where the service needed a restart, as characters and frames were jumping around all over the screen. Maybe it was due to wireless interference at CES 2014. Maybe it was due to the massive input lag present in the HDTV being used. It’s hard to say for sure, but what is certain is that it was far from playable. That’s not to say another type of game couldn’t be feasible on this service (something running at a lower frame rate, and with more leniency in button timings). As it stands, I think the service needs more work before it can be presented as a viable gaming option. 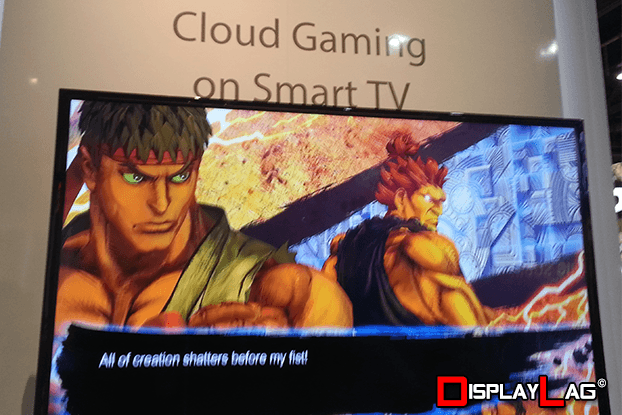 Street Fighter X Tekken was the game used to demo GameNow. Unfortunately, I found it to be an unplayable mess. Hopefully the service will improve with time.

This wraps up my brief look at what Toshiba and Hisense had to offer at CES 2014! I will be writing in-depth coverage for ASUS, BenQ, Sharp, and Vizio based on what I saw at CES 2014. In the meantime, don’t forget to check our input lag database, with nearly 300 displays tested for input lag!